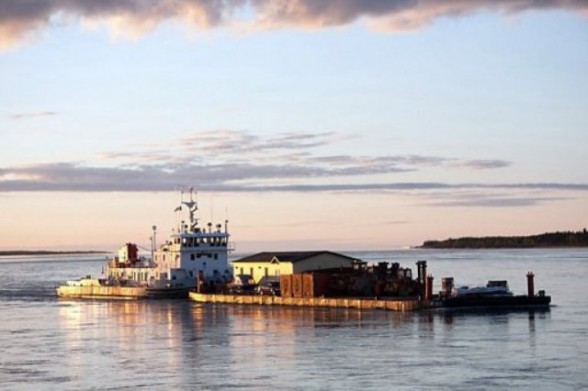 (September 27, 2010) – The little yellow mosque has arrived in the Arctic to serve a growing Muslim population in Canada’s far north after travelling 2,485 miles over land and water, the project sponsor, Zubaidah Tallab Foundation of Thompson, Manitoba announced last Thursday.

“By the Grace of God Almighty the mosque has completed its long 4,500 km journey and made it into Hay River on Wednesday Sept. 22 at 5:48 pm. This marks the world’s longest house move and North America’s most northern and remote mosque,” the Foundation says on its website.

The Zubaidah Tallab Foundation embarked on its most ambitious project to date – to build a mosque and send it to the city of Inuvik in the Canadian Arctic.

Construction of the mosque took place in Winnipeg and, once it was completed, it was trucked to Hay River and then put on a barge along the Mackenzie and Hay River to the city of Inuvik.

“The entire Muslim community of Inuvik went to the dock to greet the mosque — men, women and children, about 80 people — when it arrived Wednesday afternoon,” Hussain Guisti of the Zubaidah Tallab Foundation told AFP.

“It was the first time there were no taxi drivers in all of Inuvik,” he quipped. The few cabs in town are apparently all driven my Muslim men.

The mosque will be unloaded and moved to a parcel of land purchased by the congregation in a residential part of the town, and topped with a minaret before it is ready on November 5 for its inauguration.