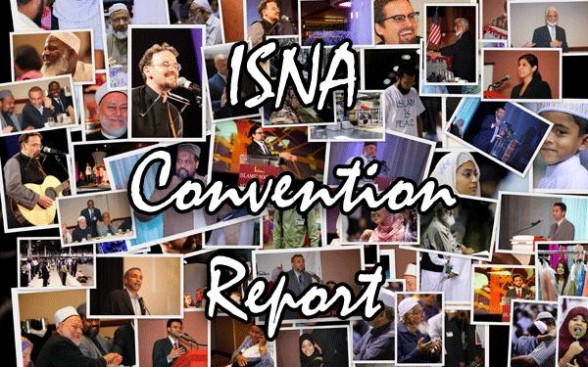 The Islamic Society of North America (ISNA) held its 47th Annual Convention over the July 4th weekend in the Rosemont suburb of Chicago, Illinois.

Thousands of Muslims from across North America and the globe convened in one place to celebrate this year’s theme, “Nurturing Compassionate Communities: Connecting Faith and Service.”

ISNA Secretary General, Safaa Zarzour, expressed deep gratitude for all who made this year’s convention possible.

“We are so thankful to all who attended this convention, all the volunteers, the wonderful Chicago community, and the Council of Islamic Organizations of Greater Chicago.”

Hotels in the area were sold out due to high demand for the ISNA Convention and local, national and international media traveled to the convention to share with the world the message of compassion and community service echoed throughout each of the more than 100 convention sessions and special events.

ISNA President Dr. Ingrid Mattson shared with the media the purpose of this year’s theme.

The convention ran through Monday July 5

Entitled “Nurturing Compassionate Communities: Connecting Faith and Service,” the session addressed this year’s theme by highlighting ways North American Muslims can reach out and serve the community at large.

“Working for unity does not mean working for conformity,” Tariq Ramadan told the large audience.

“Remember that compassion towards one’s self is also important. If you come with sincerity, Allah will come with love.”

Shaikh Hamza Yusuf emphasized the importance of proper understanding in religion while urging the promotion of accurate and accredited scholarship.

“Religion is more powerful than any temporal government,” he said. “Religion is powerful, but it is also dangerous. Our religion is a beautiful religion and it is being made ugly by the acts of fools.”

America’s Special Envoy to the Organization for Islamic Conference (OIC) Rashad Hussain read a letter from President Obama highlighting the positive engagement of the Muslim community and ISNA in his United We Serve Campaign.

The session closed with remarks from the Grand Mufti of Egypt, Shaikh Ali Gomaa. Who shared his vision of community and compassion.

“I am honored. As a result of this token you have given me, I am even more committed to serve,” said Imam Siraj Wahhaj.

Wahhaj is the current Imam of Masjid Al-Taqwa in Brooklyn, New York and Chair of the Muslim Alliance in North America (MANA).

In addition, he has many years of service to ISNA as a former Vice-President and as a member of the Majlis Ash-Shura and ISNA Planning Committee.

Ahmed ElHattab, Executive Director of the ISNA Development Foundation, said, “Imam Siraj has a long history of dedicated service to his community. He has worked tirelessly to rid the streets of Brooklyn from crime, drug abuse, and violence, with awards and recognition from the Brooklyn Police Department, among others.”

600 people attended the event which included a fundraising portion.

Over 400,000 dollars in donations were pledged to support ISNA programs and services to Muslim communities nationwide.

“One of the most pressing issues we are facing now is our ability to connect with our affiliates and grassroots organizations. ISNA promises to create programs that connect Muslims with one another across the Unites States. Your help today is going to be used wisely to help get ISNA where it needs to be in our communities.”

Keynote speaker, Professor Tariq Ramadan, emphasized the importance of Muslim involvement in broader social issues and not just self interests.

“We must ask ourselves, who do we serve; power or justice; money or truth. As Muslims we have to serve all the people around the world.”

The 47th Annual ISNA Convention was packed with members of the interfaith community and government officials, as both speakers and attendees.

Dr. Mattson thanked all in attendance for graciously accepting her invitation to participate in the reception, which provided an opportunity for the leaders to network, enjoy themselves, and strengthen bonds of community leadership.

The morning of Saturday July 3 began for many leaders with the Government Officials Breakfast, chaired by Dr. Ingrid Mattson and Imam Mohamed Magid.

This event was attended by ISNA leadership, along with more than 50 national Muslim leaders, representing many of the diverse American Muslim organizations from across the nation and U.S. government officials.

Government officials in attendance responded to most of these issues and promised their cooperation to find resolution to other issues raised in the meeting.

The event was attended by more than 60 Muslim scholars and leaders of various Islamic organizations and provided an opportunity for all to learn from Shaykh Ali Gomaa who spoke to attendees about the misunderstandings of Islam and its effect on the image of Islam.

“In its correct understanding, Islam focuses on ethics, morality and cooperation,” he said.

Shaykh Ali also condemned violence in the name of Islam and urged the promotion of peace and compassion within our communities.

[Report compiled with files from ISNA]