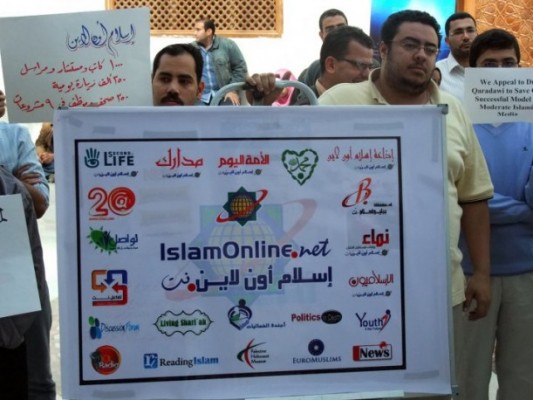 (March 23, 2010) – Journalists at IslamOnline.net (IOL) – a world leading Islamic portal – are disavowing all reports published on IOL websites over the past week, since they started a sit-in in the Cairo headquarter, in protest at the move of the Qatar-based NGO funding the portal to bar them from doing their work and posting reports on the websites as they have done for the past 10 years.

In a statement, journalists in all IOL websites slammed the deliberate sabotage of their portal by publishing weak and flawed articles utterly irrelevant to current affairs.

They lamented that their voices have been silenced while the holy city of Al-Quds, home to Islam’s third holiest shrine, is suffering under the yoke of the Israeli occupation.

More than 350 journalists and employees in IOL started their sit-in on Monday, March 15, after officials at the new board of directors of Al-Balagh Cultural Society in Qatar, which funds IOL, sent lawyers to take over the Cairo headquarter — the only manager of the website’s content. 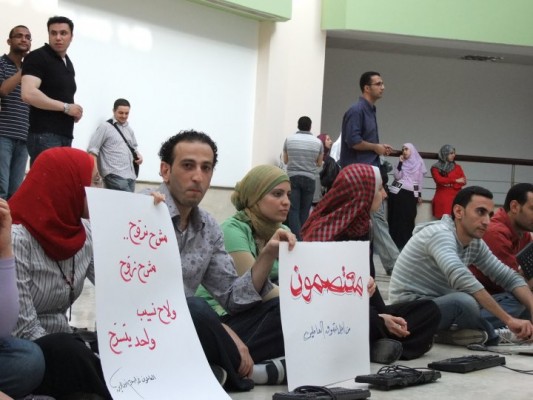 As part of a clear plan to deny employees’ rights, the lawyers were also asked to investigate with 250 employees who have sent a letter to prominent Sheikh Yussef Al-Qaradawi, Al-Balagh’s chairman, asking for his intervention to settle their disputes with the board of directors’ officials.

Sheikh Qaradawi responded to IOL journalists’ plea and froze the actions of two Al-Balagh board members, his deputy Ibrahim Al-Ansari and chief executive Ali Al-Emadi, and canceled their decision to stop IOL journalists from accessing the website.

But the two has refused to abide by the decision and defiantly closed the Al-Balagh headquarter in Doha to stop the new officials Qaradawi, Sheikha Mariam Al-Thani and Ms. Maryam Al-Hajiri has appointed from taking over.

IOL journalists affirmed that the past days have seen “deliberate sabotaging” of the website’s content.

The statement cites the plunge in daily page views, estimated at 60% down from pre-crisis rates, as one of the major grave repercussions of the ongoing crisis.

The Arabic website hits nosedived from 200,000 a day before the crisis to nearly 86,000. The same plunge in page views was also registered in the English website.

Prominent media and Muslim figures continue to throw their support behind the IslamOnline.net’s journalists in the current crisis.

Fahmi Huwaidi, a distinguished Egyptian thinker and writer, wrote a column in the Egyptian daily Shorouk about the crisis.

“What puzzles me is that over the past ten years IslamOnline.net was bacon for enlightenment and professionalism. It made a name with all those who aspired for a place symbolizing Islamic moderation and openness.”