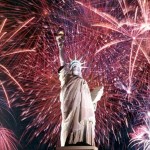 This Fourth of July, Americans gathered at barbeques, watched firework displays and remembered the men who assembled in Philadelphia to sign the Declaration of Independence in 1776. For many, the celebrations serve as a reminder of the value of freedom, of a country forged by the people in direct opposition to monarchy and tyranny.

It is sometimes easy to forget, however, that America’s founders were also concerned with another kind of freedom: the freedom to worship.

For the Founding Fathers, religious freedom was at the very core of being American. As America’s first president George Washington wrote, America was open to receive “the oppressed and persecuted of all nations and religions”, including Christians, Jews and Muslims. However, throughout its history America has sometimes failed to live up to this ideal, most recently after the 9/11 attacks.

I saw this firsthand when I travelled as part of a research team headed by Professor Akbar Ahmed of American University to 75 American cities and 100 mosques for the new book, Journey into America: The Challenge of Islam, which explores how Muslim Americans are assimilating into American society and consequently delves into the question of American identity. We met Muslim American citizens who had been imprisoned on suspicion of planning or partaking in terrorist activities without trial and held in inhuman conditions, those whose mosques had been firebombed, and many others who had been subjected to attack and harassment by fellow members of their local communities.

And one has only to turn on the television to see that the media is full of commentators who ridicule and malign Islam’s holy book and prophet. Some Americans even told me that Muslims cannot be American.

These Americans should read the works of our own Founding Fathers. These great scholars and statesmen showed an immense respect for Islam and went out of their way to welcome Muslims. John Adams, America’s second president, named the Prophet Muhammad one of the world’s great truth seekers alongside Socrates and Confucius. Thomas Jefferson, the country’s third president and the author of the Declaration of Independence, learned Arabic using his copy of the Qur’an and hosted the first presidential iftar, marking the end of the daily fast during Ramadan. The Founding Fathers also drew upon principles from Muslim civilisations, among many others, in fashioning the American political and judicial system.

But perhaps the most striking writings on Islam by the Founding Fathers come from Benjamin Franklin, America’s great philosopher and scientist. Franklin expressed his respect for Islam and his strong belief in religious freedom when he wrote of his desire to see the Mufti of Istanbul preach Islam from a Philadelphia pulpit.

But he faced a challenge from his own countrymen in convincing them to be as tolerant.

In December 1763, a group of 50 Pennsylvania frontiersmen, seeking to prevent Native American attacks on their homes and frustrated that the government had not taken action against hostile tribes, tortured, mutilated and murdered a group of peaceful Christian Native Americans in the most horrific fashion.

The supposedly Christian frontiersmen, wrote an outraged Franklin, were more barbaric than those to which they claimed superiority.

Franklin went on to assert that Native Americans would have been safer had they been living in a Muslim country, as Islam shows even prisoners more humanity than the frontiersmen had shown free men. Franklin praised the compassion of the Prophet Muhammad, writing that the Prophet had applauded the humaneness of soldiers who treated their captives well. Franklin also spoke of his admiration for the 12th century sultan Saladin as a ruler who demonstrated both justice and compassion.

In a country where feelings against Islam are precarious, the outlook of the Founding Fathers could not be more significant. And at a time of tension between some people in the United States and the Muslim world, both Muslims and non-Muslims can benefit by considering both the American ideals of the Founding Fathers and the Islamic ideals for which they had such admiration.

These complementary ideals have been challenged to the core by post-9/11 confrontations. So as we settle back into our routines after the Fourth of July holiday, I hope we take time to remember the true America as envisioned by those extraordinary men in 1776 and work to make it a reality. The Founding Fathers would expect nothing less.