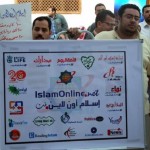 (April 14, 2010) – A widely popular Islamic website has been, until very recently, an undisputed success story. IslamOnline arrived at a time that millions of Muslims needed a common platform and a unifying outlet. Here was a website that neither shunned nor alienated. Its influence was upbeat and positive, rather than destructive or divisive. While it wasn’t an apologetic outlet, it reached out to patiently and progressively present Islam and Muslim issues to the world. These were understood and communicated by hundreds of scholars and qualified journalists, who toiled day and night from their Cairo offices.

Then something happened to abruptly bring the noble mission to an end. The success story suddenly became a terrible nightmare for hundreds of IslamOnline’s principled employees. The website (IslamOnline.net) remained online, but it was barely updated. Instead, videos were circulated on youtube, showing tired-looking IslamOnline staff chanting in the lobby of their building in Cairo. They were demanding the return of their editorial freedom and rights. They were calling for justice. These bright journalists, some of the finest in the region, should have been sitting behind their computers screens writing, editing and managing ‘live dialogues’ between inquisitive readers and learned scholars. Instead they were seated on the floor with signs and banners, shouting in coarse voices.

Something had gone horribly wrong.

Hadeel al-Shalchi tried to explain in a recent Associated Press report: “The Qatari government has forced out the moderate leadership of a popular Islamic Web site and plans to reshape it into a more religiously conservative outlet, former employees of the site said.”

According to the AP report, “The site was thrown into turmoil…when the owners attempted to change its approach, prompting 350 of its workers in Cairo to go on strike. Management in Doha then cut off their access to the site and have been updating it with news articles but not the diverse content IslamOnline is known for, said the former employees.”

IslamOnline is funded by al-Balagh, a Doha-based company. Al-Balagh was headed by well-respected Sheik Youssef al-Qaradawi, a most sensible and judicious religious authority. He is known, and much liked, for his progressive views on Islam. Al-Qaradawi is also very popular among Muslims around the world, not least because of his daring political views, his strong anti-war, pro-resistance stances and moral clarity on many issues. In short, al-Qaradawi is the antithesis of religious clerics who would do as they are told.

A striking IslamOnline editor described to me how the crisis developed. It sounded something similar to a coup: the Sheik was removed from al-Balagh, the site’s directors were relegated, a new management was installed (in fact imposed), and even the website passwords were changed so that employees could no longer access it. Devastated and enraged by the unwarranted moves, about 350 employees went on strike – only to find themselves subject to legal investigation by some company lawyers for exercising what is universally accepted as a fundamental right. The editor tells me that they were harshly criticized in particular for their uncompromisingly courageous coverage on Palestine and Gaza. Indeed, IslamOnline had worked tirelessly to bring greater awareness of the struggle in Palestine, to Muslim and non-Muslim readers alike.

Following the tragic events of September 11, few websites have played the vital role that IslamOnline has. Its editors did not serve the cause of fanatics, with their dreadful interpretation of the world and themselves, and nor did they adopt the mouthpiece position in favor of Arab governments. Equally important, they did not try to falsify a ‘moderate’ position to please any government – Arab or any other. Instead, they truly reflected and genuinely expressed the views of mainstream Muslims from all walks of life, and from all over the world. It was truly an impressive feat to see such an independent editorial line emerging from one Arab capital and largely funded by another.

But it seemed too good to be true – thus the terrible, chaotic and devastating changes that brought this vital to a standstill. The very means of presenting an eloquent Muslim voice to the world has been threatened.

The story of IslamOnline is being presented as that between rival Arabs: governments, groups and individuals. Reductionist terminologies– such as conservatives vs. moderates – are once again permeating the often predictable Middle East discourse. Many questions still remain unanswered.

In fact, the story of IslamOnline pertains more to media freedom and editorial independence in Arab countries than much of the above. The struggle is between the self-serving politicking few, and hundreds of media professionals – brilliant and inspiring young women and men who made up the staff at IslamOnline. For them, IslamOnline was not just another job. It was a mission, a calling even, and millions of readers around the world appreciated their work, every word of it.

One can only hope that IslamOnline will find its way back, with its current employees and current editorial line intact. The success story must not be allowed to end. Individual ambitions cannot stand in the way of this rare generational mission that is now simply indispensable.
#

Ramzy Baroud (www.ramzybaroud.net) is an internationally-syndicated columnist and the editor of PalestineChronicle.com. His latest book is “My Father Was a Freedom Fighter: Gaza’s Untold Story” (Pluto Press, London), now available on Amazon.com. Source: www.Palestinechronicle.com