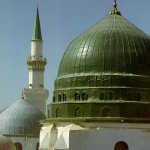 The Prophet, Allah bless him and grant him peace, has touched my heart like no other personality or hero in the world. I have had life long association with his life, his words, actions and behaviour; yet no day in my life passes without my love for the Prophet increasing. Let me explain the reasons:

1) The Prophet is my source of inspiration for my connection with Allah. I find myself closer to Allah as I awake to his words, “thank you Allah for your gift of life; health, and remembrance.” He keeps me company prodding me to take God’s name as I do my daily chores, bathroom rituals, ablutions, sneezing, yawning; as I take my breakfast, and as I chat with my family; and when I step out of my home; as I enter the mosque, and wait for prayer; and as I converse with people; he keeps reminding me how to be conscious of Allah; to smile; to be gentle; to show mercy to the young; to respect the old; to greet everyone; to walk humbly; to render tender care to all God’s creatures, big and small.

2) As I accomplish my tasks, and cherish the satisfaction of my achievement, I am reminded never to allow myself to slip into a feeling of vainglory, for the Prophet’s utter humility in his peak moment of victory as Makkah fell to his hands can never be forgotten.

3) How can I ever forget his hundreds of companions, upon whom he had impressed the deepest love – so that their source of joy at the final moment of their life was they would have the chance to be reunited with their beloved. How can the spectacle of Bilal’s death be out of my mind as he comforts his wife who cried to see her husband was dying, “honey, it is time to rejoice, for I will soon be reunited with my beloved Muhammad and his company.”

4) I wonder what charisma he possessed as the hundreds of men and women would only refer to him as the beloved, and they all give the impression that no matter how eloquent they were, their words cannot fully describe his magnanimity, his nobility of character, and benevolence.

5) To those who simply call him a conqueror or warrior, I can only point to the casualties of his wars. History does not record a warrior who won so many battles with so little bloodshed as he did. To those who say otherwise, listen well to his admonition to his soldiers before battle, “stay away from the habitat of animals”; “God admonished a prophet saying, “Because an ant stung you, are you to burn down an entire community that glorifies God?”

6) I find no leader who won his enemies to his cause through his noble character and magnanimity like he did. Their number and affiliations vary: chiefs of tribes, kings, commanders, orators, men and women of all types and ages: their enmity turned into passionate love for him and his cause – as if through a miracle.

7) The Prophet’s spiritual retreats, and his solitary moments of prayers and meditations as he slipped out of his bed at night, to be alone with the Alone, and then when distracted by his wife, saying to her, “let me be alone with my Lord”; the spectacle of his tears often soaking the blanket can never be erased from my mind. His constancy in celebrating God’s remembrance led his beloved wife to remark, “the Prophet was always celebrating the remembrance of Allah”.

8)To those who deify the Prophet and thus try to dilute his monotheistic faith, making it no different from a pagan cult, I can only remind them of his relentless efforts to remind men and women, young and old, of his mortal nature; his repeated assertions to the people that he was merely a simple slave of God; his rejection of their attributing knowledge of the unseen realities or what tomorrow will bring.

9) In spite of all these, when I hear people refer to him as a worldly leader, I find myself asking, which worldly leader had no cooking fire kindled for days at home, due to chosen poverty? Which worldly leader survived on dates, water and occasional cups of milk, preferring to part with everything he had, in order to provide for the poor? Wasn’t he the one who prayed, “Lord, let me live poor; die poor and be resurrected in the company of the poor?”

10) As I deal with the humblest creatures of God, I cannot take out of my mind his constant reminders to Muslims, “you are only fed and given water by God because of the weak among you,” and, “the best Muslim home is where an orphan is cared for”; and, “be conscious of Allah in the way you treat these mute creatures of Allah”. Didn’t he teach his followers that God forgave a prostitute for giving water to a thirsty dog, thereby making constancy in mercy a trait of every person of faith?

11) I can only conclude this by saying: O Messenger of Allah, you are indeed my role model, for you taught me to find meaning and purpose in my life. My only prayer to God is to make me a worthy follower of yours – even as my parents chose your name for me. May Allah shower upon you, O Messenger of Mercy, choicest blessings, and give us the honour of joining your noble company in the hereafter – aameen.