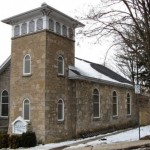 (April 22, 2010) – The newest mosque in the City of Guelph, Jaamia Abu Bakr Siddique (Islamic Society of Guelph), is participating in Doors Open Guelph 2010.

On Saturday, April 24, Guelph residents and visitors will once again have the opportunity to participate in the annual celebration of the City’s history and architectural heritage.

The mosque, formerly an attractive small church of non-conformist design incorporating classical features, was built in 1856-57 for Scottish Congregationalists, and is Guelph’s second-oldest remaining stone church.

In 1882, it was sold to the Disciples of Christ, who occupied it until 2008 when it was purchased by the Islamic Society of Guelph and converted to a mosque.

The Muslim Society of Guelph looked for years for a place to build a new mosque but when donated land outside the city fell through, and the city refused to rezone land in the south end to allow a mosque to be built there, the society bought the former Guelph Christian Church (Disciples of Christ) building.

A full day of programs is planned for Saturday at the Mosque.

Activities will include guided interactive tours of the mosque, an Islamic poster exhibition, a Holy Qur’an in world languages display, an Islamic cultural display, showing of Islamic documentaries, free refreshments and free gifts for everyone.

Across the city, between 10 a.m. and 4 p.m., several of Guelph’s most architecturally and historically significant buildings – most of which are not generally open to the public – will also open their doors for free public tours.

The mosque is located at 126 Norwich Street East, Guelph (www.islamicsocietyofguelph.ca)