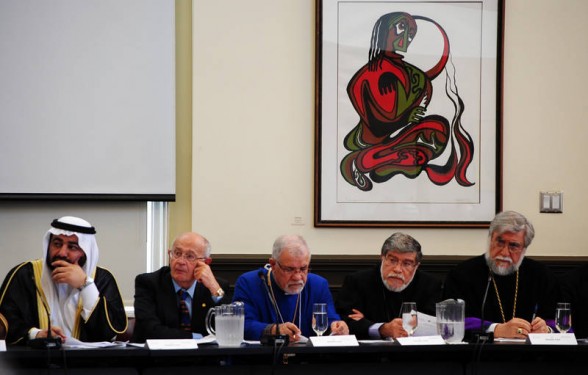 (June 23, 2010) – After three intensely packed days, 80 senior leaders of eight world religions and faith based organizationsfrom more than 20 countries, together with 13 youth delegates, spoke with one united voice to deliver a strong and simple message to governments: honour your commitments to the poor and vulnerable of the world – especially children.

Senator Romeo Dallaire, The Rev Dr. Andre Karamaga (General Secretary of the All Africa Conference of Churches), His Holiness Aram I (Catholicos of Cilicia), The Rev. Jim Wallis (founder of Sojourners), John McArthur (Millennium Promise), as well as a representative of the Archbishop of Canterbury were found on the long list of distinguished guests and speakers from six continents and eight faith traditions. The Anishinabe Nation opened the Summit with the lighting of a sacred fire and then joined other leaders at the discussion table.

The statement, developed in consensus and unanimously endorsed by the leaders, calls upon political leaders to honour their commitments as expressed in the UN’s decade-old Millennium Development Goals: keep promises of poverty reduction – especially on behalf of children, act on climate change in concrete ways, and military budgets to non-violent peace building activities.

Rev. Dr. James Christie, Chair of the International Continuance Committee of the Summit, said, “This was a grand gathering of like-spirited individuals with remarkable commitment to both holding political leaders accountable while making their own contributions to fulfilling the UN’s Millennium Development Goals.”

Their statement, A Time for Inspired Leadership and Action, urged political leaders, especially those of the G8 nations, to achieve the Millennium Development Goals by listening intently to the voices of the weak and vulnerable. The statement also calls governments to:
• Take all necessary steps to achieve the Millennium Development Goals and meet the 0.7% of Gross National Income target in development assistance
• Ensure that harmful climate change caused by humanity does not exceed a 2 °Centigrade increase from pre-industrial levels.
• Drastically reduce military spending in favour of overseas development assistance and permanently eliminate nuclear weapons

The full text of the statement is at www.faithchallengeG8.com