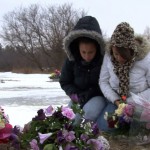 (May 8, 2010) – In The Name of the Family, a film by Shelley Saywell, has won the best Canadian feature award at the Hot Docs Film Festival.

The film looks at the story of young women struggling with their families including Aqsa Parvez, a Mississauga, girl whose father was charged with her killing.

On December 10, 2007, the 16-year-old Toronto schoolgirl, Aqsa, was strangled to death; her father and brother are charged with murder.

Three weeks later, teenage sisters were shot to death in Dallas; their father is wanted for murder.

Six months later, a 14-year-old girl was stabbed by her brother; he was convicted and is now in jail in New York.

Friends and family of the murdered girls paint a chilling portrait of the forces that led to their deaths, and Toronto schoolgirls talk about their lives of constant fear.

While Muslim women organize to help girls at risk and the imam at a Toronto mosque teaches that violence has no basis in Islam, some men continue to justify these crimes through patriarchal beliefs about family honour.

Award-winning director Shelley Saywell brings her consummate documentary skills and passion for human rights to challenge the traditions that lie behind the heartbreaking tragedies committed against young girls caught between two cultures in North America.