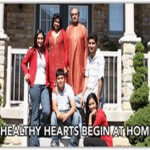 This is the first published study to compare cardiovascular risk factors and heart disease across four ethnic groups living in the same macro-environment with similar access to health care.

It also examined prevalence estimates by age and sex to identify subgroups at highest risk. The study was funded by the Heart and Stroke Foundation.

The researchers found that the Chinese population had the lowest overall prevalence of heart disease (3.2%) and stroke (0.6%) while South Asians had the highest prevalence (5.2% and 1.7%).

Despite having the least desirable cardiovascular risk profile, the black population had a relatively low prevalence of heart disease (3.4%).

Smoking and obesity were more common in the white population while the South Asian and black populations had the highest levels of diabetes and hypertension.

Cardiovascular diseases, including stroke, are the leading causes of death worldwide.

Evidence from mortality studies suggests that the burden of these diseases differs across nations. Previous studies have been conducted in different environments with different health care systems and differing rates of access to health care.

“Awareness of these differences will become increasingly important as ethnic minority groups come to represent a larger proportion of the Canadian population.”

They conclude that there may be a need to develop ethnically tailored strategies for preventing cardiovascular risk factors in Canada.