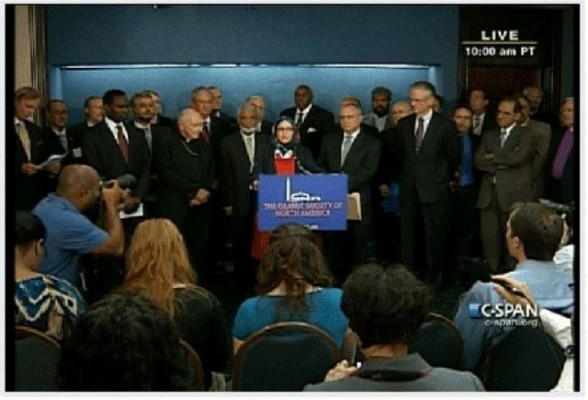 Directly following the interfaith summit held in Washington D.C., members in attendance held a press conference and issued a joint statement to the public regarding unified action for faith communities to promote tolerance and combat anti-Muslim rhetoric, hate crimes, and Islamophobia.

The press conference, telecast live on CNN and CSPAN, included statements from members of the Jewish, Muslim, and Christian faiths to discuss the critical need for members of all faiths to protect the safety and civil rights of Muslims. A member of the interfaith summit stated, “Hate is neither a religious nor democratic value.”

In an excerpt from the interfaith statement issued at today’s press conference, the faith leaders stated: “Religious leaders denounce anti-Muslim bigotry and call for respect for America’s tradition of religious liberty. As religious leaders in this great country we have come together in our nation’s capitol to denounce categorically the derision, misinformation and outright bigotry being directed to the American Muslim community. We bear a sacred responsibility to honor America’s very favorite traditions and to promote a culture of mutual respect in assurance of religious freedom for all. In advance of the ninth anniversary of September 11 attacks, we announce a new era of interfaith cooperation…silence, silence, silence is not an option.”

The press conference spanned topics ranging from the role of ISNA and the interfaith community in protecting civil rights, the growth of the Muslim community, to the proposed Quran burning in Florida, to which ISNA President Dr. Ingrid Mattson called all Muslims to exercise the principles of Islam and this Ramadan of patience and remember that “although we are upset, we are alarmed, (by the acts of Quran burnings), our community should feel confident that God’s eternal words will live on. The Quran will not disappear with the burning of a book because millions of Muslims hold it in their hearts.”