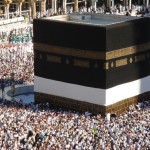 Muslims in North America, as well as in many other parts of the world, hold two different opinions about the observance of Eid ul-Adha.

Some Muslims observe it on the 10th of Zul Hijjah according to their local lunar date and others follow the announcement of Hajj by the authorities in Makkah.

Saudi Arabia has declared that the day of Arafah will be on Monday, November 15, 2010.

Accordingly, they have declared that Eid ul-Adha will be on Tuesday, November 16, 2010.

Meanwhile, the Hilal Committee  of Metropolitan Toronto has announced Eid ul-Adha will be on Wednesday November 17 as “there have been no reports of confirmed sightings of the new Hilal for Dhul Hijjah 1431 on the eve of Saturday the 29th Dhul Qa’adah 1431, from within the parameters of the Hilal Committee of Toronto”