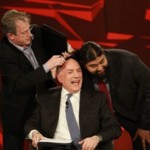 A raucous, often hilarious argument over the relative merits of men and women, ranging from beards to shopping to mothers-in-law, brought the sixth series of Doha Debates to a unique crescendo and left many in the audience weak from laughter.

The season finale, debating the motion that “women are superior to men” marked a sharp departure from the forum’s normal political diet – with both teams competing to be more outrageous than the other.

The audience also rose to the occasion, asking why it was that behind every successful man was a surprised woman and why, when the doctors’ waiting rooms were full of women, the mortuaries were full of men.

Whatever the reasons, the female sex won the night convincingly with the motion passing by a huge margin of 67 to 33 percent.

Speaking in favour was Maysoon Zayid, a Palestinian-American actress and stand-up comedian, whose skills were honed in the tough clubs of New York.

“Men,” she reminded members of the evenly-divided male-female auditorium, “you wouldn’t even be here if it weren’t for us. We brought you into this world and we can kill you”.

Zayid, tall, elegant and clearly mistress of her brief, said that notions of “the weaker sex” were merely a ploy. “We tricked you guys into thinking we couldn’t do anything so you would do everything for us.”

And if the audience had missed the point, she explained that while “men in the West have to beg women to marry them, men in the East have to pay them because no (woman) would do that voluntarily.”

She was joined in her argument by Azhar Usman, an American Muslim and co-founder of the “Allah made me funny – Official Muslim Comedy Tour”.

Usman pointed out to loud applause that women were “kinder, nicer, gentler and smarter” than men. “They are more attractive and beautiful while men are…disgusting.”

He said the view that all Muslim men are terrorists, oppressing women, needed to be corrected. “Have any of you ever been inside a Muslim household?” he asked. As the audience, anticipating the punch-line, collapsed in laughter, he explained: “You find the exact opposite (of what you expect). The woman is the terrorist and oppresses the man.”

Arguing against the motion, Robin Ince and Carrie Quinlan, both British comedians, actors and writers, gave the impression that they were playing devil’s advocates rather than speaking with true commitment.

“What did the Spice Girls do with Girl Power?” asked Ince. “Did they use it to build advantages for their cause? No, they used it to get drunk and dance on tables.”

Far from being the brighter sex, women were the cause of some of the world’s greatest misfortunes such as the Black Death, brought to Britain by rats on boats sailed by men who had travelled the world to find spices for women.

Carrie Quinlan, who looked as though she would rather have been arguing for the motion, suggested that it was beards that symbolized the innate superiority of men.

“Some of the world’s greatest men have beards and women cannot grow them,” she said. Plato, Socrates, Da Vinci, Darwin and Shakespeare were prime examples of bearded superiority. “And what’s more they can grow them without any effort at all.”

Ms Quinlan might have won her point had it not been for Maysoon Zayid’s claim that, without depilation, she, too, would have grown a beard.