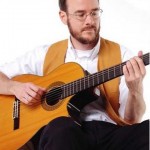 (June 6, 2010) – Arts initiative, Enter Into Peace, has announced that poet and songwriter, Dawud Wharnsby, is now an official ambassador of Scouts UK.

The June 2010 issue of Scouts UK’s monthly journal features an interview with Wharnsby who discusses his life as an international-citizen, artistic expression as a tool for social change and why he feels Scouting helps young people strengthen their skills for life and build strong commitment to their communities.

“The School of The Earth and The University of Community can provide us with rich educations. Scouting opens doors to such learning for many young people – especially those living in urban environments. I am tremendously honoured to support the initiatives of Scouts globally,” Wharnsby said.

As an ambassador to Scouts UK, Dawud Wharnsby will be available to Scout groups internationally, eager to visit their gatherings during his travels, to share his music while learning from their local community activities.

“Darwud is an internationally renowned composer and artist who has recorded over 15 albums. In addition, due to the popularity of his educational recordings for children, he frequently visits schools worldwide and through his music and unique discussion promotes tolerance, diversity and social cohesion. Darwud had originally been approached by Scouts in Bristol who were impressed by his enthusiasm and so forwarded his details to me. Look out for further developments,” said Wayne Bulpitt, Scouts UK Chief Commissioner.

At present Wharnsby is in the United Kingdom where he will be meeting with Scout groups in Bristol over the next two weeks.