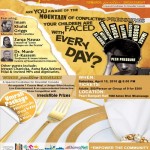 (March 31, 2010) – One of Toronto’s most active youth collective, DawaNet, is hoping to broaden community support for its services and projects with a gala fund raising dinner to take place on Saturday, April 10.

“As the Muslim youth population growth-rate has now surpassed any other religious denomination in Canada, it’s high time we supported this neglected segment of our community with love, time, donations,” says Taha Ghayyur Development Manager, Sound Vision Canada and one of the organizers.

The theme of the event is “Jihad within Young Hearts: Towards Positive Engagement” and will include a panel discussion on engaging youth and transforming their frustrations into positive attitudes

Speakers and panellists include Imam Khalid Griggs, an Educator and Imam of the Community Mosque, North Carolina; Dr. Munir El-Kassem, Professor, Schulich School of Medicine and an Imam at the Islamic Centre of Southwestern Ontario, London; Zarqa Nawaz , the creator of the CBC show, “Little Mosque on the Prairie“; Jeewan Chanicka, an Educator and Youth Activist and Asma Bala, VP-Canada of MSA National.

According to the event organizers it is, ‘Not just another fundraiser!’ but an evening that will include ‘an exquisite 7 Course Meal, Live Entertainment, an unprecedented interactive trivia competition, and irresistible prizes, such as an Umrah package, Nintendo Wii, Netbooks and more!’