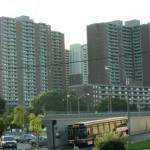 (April 21, 2010) – The Danforth Islamic Centre (DIC) located in Toronto’s east end joined in the Congregations Act to support the Fight Against Malaria campaign and has set an example for other faith communities by tripling its fund-raising target.

On Friday April 9, 2010 an awareness building and fund raising drive to fight malaria was organized after the regular Friday prayers at the Centre and over $300 was raised.

Although raising the target of $100 looked doubtful in this congregation, which is situated in one of the priority neighbourhoods in Toronto, the faithful contributed $315 for this cause.

“Specifically we are asking congregations across Canada to include an educational announcement in worship bulletins during Faiths Act week, April 25th to May 1st and consider raising $100 for 10 life saving bed nets,” Erica Spracklin, a Faiths Act Fellow and organizer of the Fight Against Malaria campaign, told Iqra.ca.

Crescent Town is one of the priority neighbourhoods where over 40% of the 16,000 population lives under the poverty line and 39.6% of the population are newcomers to Canada.

The newcomer percentage is higher in this dense neighbourhood compared to the Toronto average of 21.6%.

There are three mosques in the area serving a predominantly Bangladeshi community.

It is quite understandable that Danforth Islamic Centre didn’t expect to raise the bare minimum of $100 from those who attend the Friday service.

So, as a generous gesture towards this cause, the Dandforth Islamic Centre management committee agreed to top up whatever was raised to make up the $100 minimum amount.

However, the congregation stepped up and donated over $300.

The Friday sermon was delivered by Sheikh Irshad Osman (Naleemi), who spoke about the effect of malaria which kills over 1 million people every year, most of them children under 5 years old.

In his latest series of monthly Friday lectures, Osman has been speaking to the congregation about assisting people of other faiths and not constraining themselves to their own communities.

“Religion is not local; it is not ethnic; it is not selfish. Rather it is a global force for good, encouraging its followers to assist one another and look after the welfare of one another, irrespective of others’ religion, creed, or skin colour,” Osman said.

“Show compassion to those on earth; you will be shown compassion by those in the heavens,” he quoted one of Prophet Muhammad’s famous sayings.

The congregation was informed that every 30 second 1 child breathes its last because of malaria, an entirely preventable and treatable disease.

Irshad Osman encouraged the gathering to make a difference in the lives of fellow human beings.

“This is an excellent opportunity to show your compassion to people of Africa. The funds you raise today will be invested to buy bed nets for vulnerable families. They all are creation of Almighty God. Our roots are same. Our values are same. We should feel other’s pain. Losing one member in our family is not easy. How about when it happens annually to some communities? Let’s get together to help. This kind act will be rewarded immensely in this world and the hereafter”

Congregations from diverse faiths across Canada have come together in solidarity to support a national initiative, from the Maritimes to the prairies including Montreal, Toronto and Ottawa. To see a complete list of all congregations please visit www.congregationsact.com.