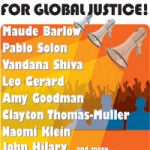 (June 8, 2010) – The Council of Canadians has announced that the Shout Out for Global Justice public event, scheduled for Friday June 25, will now be held at Massey Hall in Toronto.

“Strategically planned between the G8 and G20 Summits of world leaders, the Shout Out for Global Justice will bring together leading Canadian and international social justice activists, labour leaders, journalists, authors and policy experts for a timely and necessary public forum to directly challenge their undemocratic closed door meetings,” says Council of Canadians chairperson Maude Barlow.

“This touchstone event also illustrates that you don’t need to spend a billion dollars to hold a meeting of world leaders.”

Temporarily shut out from Convocation Hall due to the University of Toronto St. George campus closure announcement last Monday, organizers are thrilled to be landing at Massey Hall, bringing the event even closer to where the G20 leaders will be sequestered.

With a billion dollar-plus price tag, infringements of basic civil liberties, massive disruptions for those who live in Toronto, and a ‘business as usual’ agenda that serves neither people nor the planet, the Council of Canadians is calling on Prime Minister Stephen Harper to scrap the upcoming G8 and G20 summits.