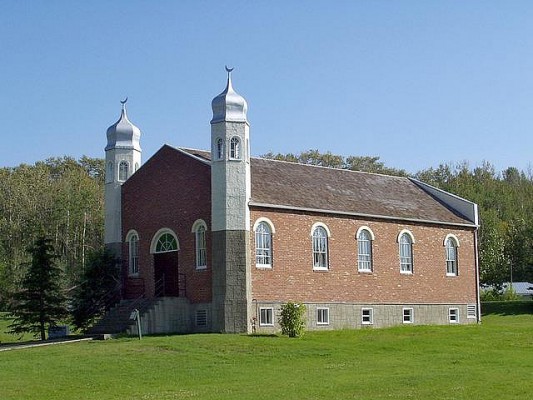 The year was 1938 and Canada’s Muslim population stood at just around 700, in stark contrast to the close to 1 million Canadian Muslims today.

And there were no mosques in the country.

So a woman by the name of Hilwi Hamdon, along with her friends, approached Edmonton’s mayor, John Fry, for a piece of land to build a mosque.

“You don’t have any money to build a mosque,” he said, according to an article on the mosque published in the July/August 1998 edition of Saudi Aramco World magazine.

“We’ll get the money,” the women replied.

Fry agreed to provide the land for the mosque if the women could come up with the $5,000 needed for the construction, which was a lot back then, especially during the Great Depression.

The women went from shop to shop along Edmonton’s main street to raise funds.

Regardless of the faith of the shop owners – whether Jewish, Christian or Muslim – the women asked for support.

With these efforts came the birth of the Al-Rashid mosque, a proud moment in our collective history.

Canada’s first mosque shares its name with another Canadian Muslim first, although the two are not linked.

Canada’s first Muslim seminary, Al-Rashid Islamic Institute, was founded in 1980 by a Muslim scholar from India who arrived in Montreal with a mission to do just that.

There were a few problems though – he spoke no English and had little money.

He also didn’t have anyone to welcome him, so he spent a few nights at Montreal’s airport until the Islamic Centre of Quebec took him in.

Fast forward to today and the seminary is located on a beautiful 23 acre waterfront campus in Cornwall, Ontario, and has over 100 students, with more on a waiting list.

Just as our individual and family medical history plays an important role in diagnosis and prevention, history – especially that of our faith and communities – can also be an important source of lessons, inspiration and hope.

In numerous verses of the Qur’an and traditions of the Prophet (upon him be peace and blessings), we are reminded of historical events so that we can reflect upon and learn from incidents of the past.

Although the history of Islam and Muslims over the last 1,400 years is filled with triumphs, discoveries, inventions, rich culture, and yes, some difficult moments as well, much of it remains unknown to average Muslims today.

The good news though is that with October being designated as Islamic History Month by the Canadian parliament in 2007, awareness of Islamic history is on the rise.

Communities across Canada have been marking the month with special events at mosques, schools and libraries, among others.

The Royal Ontario Museum in Toronto will also celebrate Islamic history with its third annual Muslim Heritage Weekend on October 24 and 25. (Visit www.muslimweekend.com for details.)

By educating ourselves about our past, not only can we learn lessons for the future but also give hope and inspiration to our children to resurrect the Islamic legacy of scholarship, discovery, invention and culture.

*Sikander Hashmi is the Imam at the Islamic Centre of Kingston and a journalist, marketer and teacher. He can be reached through his website, www.sikander.ca.