The Council received a petition containing approximately 1450 signatures in support of renaming the park. 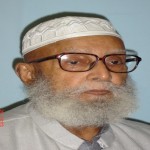 The Community Council, at its meeting of November 10, 2009, considered a letter from Councillor Raymond Cho to rename the park.

The Council will consider the staff recommendation at its next meeting on Tuesday, April 27, 2010.

The late Muhammad Abbas Ali, commonly known as Major Abbas, was a retired officer in the Pakistan Army.

In 1993, he founded the Muslim Welfare Centre, located at 100 McLevin Avenue, which supports and works with residents from all backgrounds and religions who require assistance.

The Centre has helped over 6,000 families in need through its food banks in Scarborough, Mississauga and Whitby.

It also supports a 40-bed women’s shelter in Whitby, free health clinics in Toronto and a “Water Exploration Program” which helps to create wells in remote areas of the world.

Major Abbas had a unique zest for life and participated in numerous fundraising “adventures.”

In 1987, Major Abbas participated in a walk in the United Arab Emirates to support the World Health Organization. While in his early 70’s, he was involved in several charity walks in Canada to support the Canadian Arthritis Society.

At the age of 77, he participated in a skydiving fundraising event at 10,500 feet, with proceeds benefiting the Support a Child-Save the Nation fund.

Major Abbas was the recipient of numerous awards for his charity work. They included: the UNICEF Award for service to children; the Ontario Ministry of Citizenship Award for his tireless work in the community, the Commendation on Commitment to Voluntarism from the then Premier of Ontario, the Hon. Michael Harris; Her Majesty Queen Elizabeth II’s Golden Jubilee Award and the Outstanding Asian-Canadian Community Award.

A father of seven, he is survived by his wife Sarwar Abbas, 77, who also devotes her time to residents who require assistance and supported Major Abbas in all his projects.