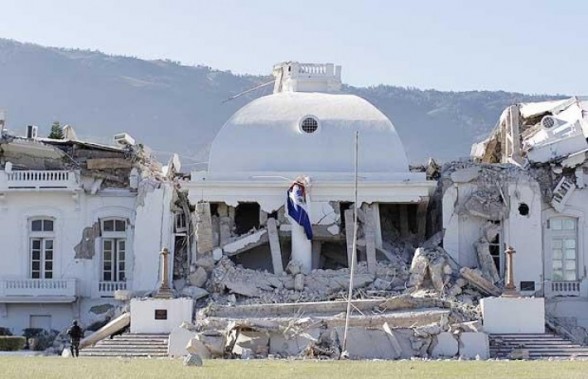 (January 17, 2010) – The atmosphere during the Friday prayer at the International Muslim Organization of Toronto was different.

A large screen right at the center of the city’s Islamic center was showing heart-breaking images from Haiti, where a powerful earthquake has left behind massive destruction and fatalities.

In his sermon, Imam Ayman Taher reminded the congregation about the Muslim’s duty to help the suffering regardless of religion and color.

Sympathy filled the air as the images motivated people to contribute to a fundraising campaign to help ruined lives thousands of miles away.

“This fundraising drive will continue until next Friday,” Omar Farouk, the IMO President, told IslamOnline.net.

The Islamic center is one of many Muslim organizations and groups nationwide that mobilized to help the people of Haiti immediately after the country was rocked last week by a 7.0-magnitude earthquake, the worst in around 200 years.

An estimated 3 million people were affected and an untold number of people are still trapped under rubble.

“Almost all masajids and centers participated in this project,” said Dr. Zijad Delic, National Executive Director of the Canadian Islamic Congress, one of the participating groups.

In Calgary, the largest city in the province of Alberta, Muslims have risen to the challenge.

“At each of our 8 places of prayer, the Khutbah’s Friday were dedicated to a Muslim’s responsibility to help their fellow men, women and children regardless of race or creed,” David Liepert, Spokesperson, Muslim Council of Calgary, told IOL.

“I know that at our two largest mosques almost 20 thousand dollars was raised in immediate donation with more than that promised in pledges by brothers and sisters who hadn’t brought as much with them as they wanted to give.”

Many Muslim organizations have begun running individual fund-raising drives and members of the Muslim Student Association at our campuses have begun doing the same.

“We look forward to raising more than 75 thousand dollars by the end of this week.”

The poorest country in the Western Hemisphere, Haiti is one of the most densely populated and least developed countries in the world with nearly 80 percent of its 9 million people living in poverty.

“We have joined together with the rest of the Canadian faith-based organizations to do our part in making a difference, to bring help and hope to the people of Haiti,” said Hafsa Hassan, the fundraising director.

Muslim groups which raced to encourage the community help Haitians in the face of the calamity underlined it as a religious duty for Muslims.

“The first revealed suras of the Qur’an before prayers and many other ordinances were about caring for the poor, the orphan without specifying the religion,” Dr. Hamid Slimi, Chairman of the Canadian Council of Imams, told IOL.

“As a matter of fact most of the society at the time of those revelations was not Muslim.”

Dr. Liepert, the spokesman of the Muslim Council of Calgary, agrees.

“It’s a responsibility to help out people in need.”

Delic, the national executive director of the Canadian Islamic Congress, believes Muslims should do more to help.

“We have to, as part of our social and religious duty, do all humanly possible to help Haiti brothers and sisters: use our material resources as well as expert resources to help them by lessening their sufferings,” he asserted.

“We have to ‘advocate’ on behalf of those suffering now in Haiti.”