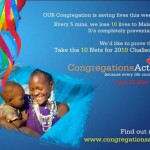 (April 9, 2010) – This April, faith communities across Canada are taking and proving their commitment to achieving the Millennium Development Goals.

During Faiths Act Week people of all faiths and ages will come together and donate their time, energy and money to ending deaths from malaria.

“Specifically we are asking congregations across Canada to include an educational announcement in worship bulletins during the week of April 25th to May 1st, and consider raising $100 for 10 life saving bed nets,” Erica Spracklin, a Faiths Act Fellow, told Iqra.ca.

“This year, as Canada is hosting the G8/G20 meeting focusing on the Millennium Development Goals, let’s show our world leaders that faith communities in Canada are really committed to saving lives!,” she added.

Malaria is an entirely preventable and treatable disease, yet it kills more than one million people every year in Africa, Asia and the Americas.

Faiths Act Week is meant to be a clear example of the positive impact faith communities can, and do, have on the world, especially when they work together.

Malaria is one of the largest killers of people in sub-Saharan Africa and also a major killer of people in South Asia, Latin America and the Caribbean.

There are over 300 million cases per year, 1 million of which lead to death.

Approximately 85% of all deaths are children under the age of five, which translates into one child every 30 seconds.

Malaria accounts for over 12 billion dollars of lost productivity in African nations, and over 40% of all health expenditures in Africa can be attributed to the treatment of Malaria.

Malaria is a preventable and completely treatable disease and yet is still debilitating entire countries.

Sleeping under a bednet can save a whole family from malaria since the mosquitoes carrying the disease are most active between 10 pm and 4 am.

Malaria is also entirely treatable if given appropriate and timely medical care.

The Millennium Development Goals (MDGs) were created by the United Nations in 2000 to give clear targets and deadlines for addressing global poverty and hunger.

There is still a lot of work to be done to reach these important goals.

Faiths Act Canada has identified malaria as their immediate focus because we have the technology and resources to make a big impact.

Tackling malaria simultaneously advances many of the other goals, including maternal health, child mortality, and education.

The focus of Faiths Act Canada (FAC) is grassroots multi-faith action, mobilizing faith communities across Canada to raise awareness and resources for the eradication of deaths due to malaria.

The group was brought together by the Tony Blair Foundation and the Belinda Stronach Foundation.

All proceeds will go to Spread the Net, a wholly Canadian charity, funding the manufacturing and distribution of bed nets in Africa working in partnership with UNICEF Canada.

For more information about Spread the Net please go to: www.spreadthenet.org

To see the growing list of Congregations already committed to act visit: www.congregationsact.ca