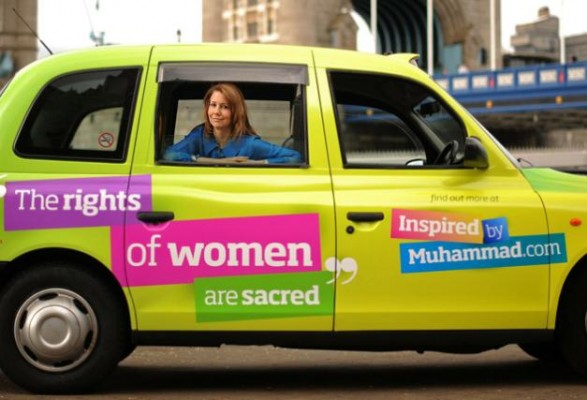 (June 7, 2010) – A new awareness campaign to improve public understanding of Islam and Muslims has been launched in London as an opinion poll shows widespread public concern at Islam’s impact on Britain today (Monday 7th June).

The campaign – “Inspired by Muhammad” – showcases how Muslims are inspired by their faith to contribute positively to British society.

The public campaign focuses on women’s rights, social justice and the environment.

It was launched by TV presenter Kristiane Backer in a London cab decorated with the campaign’s logo, in front of Tower Bridge on the River Thames.

“I am proud to be part of this campaign which is so important in promoting understanding and breaking stereotypes. This project shows the values of Islam are universal and sit well with British values,” said Backer, a convert to Islam who appears as part of the campaign.

“What better way to illustrate this than to launch the campaign from a London cab in front of Tower Bridge on the River Thames.”

The high profile media campaign, commissioned by the Exploring Islam Foundation, will include adverts at bus stops, tube stations and on London’s iconic cabs. A new website www.inspiredbymuhammad.com has been launched to explain Islam’s ethical principles and core beliefs.

Alongside the launch, a YouGov national opinion poll commissioned by the EIF at the end of May 2010 has been published. It shows:
 More than half the British population associate Islam with extremism (58%) and terrorism (50%)
 Fewer than one in seven believe that it is a religion of peace (13%) and only one in 16 a religion of justice (6%).
 Less than one in five Britons believe that Islam has a positive impact on British society (19%) with almost a third believing it is a violent religion (33%)
 Two-thirds of people believe it encourages the repression of women (68%)
 Only 16% of the British population believe that Islam promotes fairness and equality and just 6% believe it promotes active measures to protect the environment.
 Most people get their information about Islam through the media such as newspapers (41%) and TV (57%) yet a third of people questioned they would be interested in finding out more about Islam (33%).