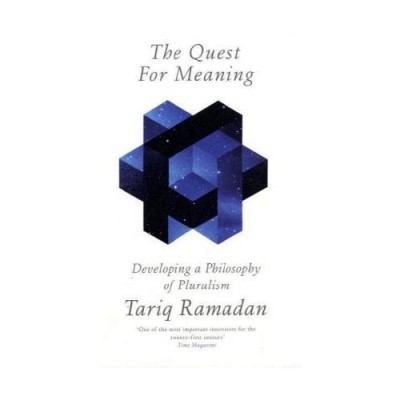 Penguin recently published my latest book, The Quest for meaning: Developing a Philosophy of Pluralism.

It is a work unlike anything I have written before, an attempt to examine and to synthesize the master narratives that inform the spiritual traditions, the philosophies and the religions of both East and West.

I wrote it as a journey of initiation into a new way of imagining ourselves and as a meditation on ideas, principles and ideals: meaning, the universal, faith and reason, tolerance and respect, feminine and masculine, ethics, emotion and spirituality, education, tradition and modernity, and love, which I go on to explore in the light of civilizations, philosophies and religions.

The style ranges from the rigorously rational by way of the spiritual to the poetic, in the image of the traditions and approaches I study.

My objective was to develop a philosophy of pluralism, one that allows us to step back from the narrow window of our own limited viewpoint, and plunge into notions, concepts, and questions, to open ourselves to the deep study of what the world’s philosophies, spiritual traditions and religions have told us down through history.

The underlying intuition is that our relationship with pluralism, with diversity and with the Other in our midst can not be decreed by laws or the best of humanist intentions; it requires instead a personal commitment, an effort that is focused on ourselves, encourages us to infuse our sense of empathy with conscience, intelligence and heart.

It outlines a philosophy of life in the strictest sense of the term, conceived as a challenge to us to muster the courage to question our certainties, to demonstrate humility toward our own accomplishments and toward the response of others, to show unceasing respect and love for our fellow humans.

It belongs not to the believer alone, but to the atheist, to the conscience of the East and of the West, to women and men alike I knew that those who have come to know me through my recent works on Islam (and not via my earlier writings on philosophy and poetry) would be surprised, not only by the project itself, but also by its style and its objectives.

Described as “a Muslim intellectual and scholar”, I had been assigned to a pre-determined category, one that was not only difficult but also dangerous to leave.

A window had been appointed for me, that of Islam, through which I must necessarily express myself, view the world and ultimately restrict myself.

Any attempt to step back from that window, to shift viewpoint, would become necessarily suspicious, questionable, a “cunning” stratagem to mislead the reader.

As if on cue, it happened.

My first interview with a French journalist was eye opening.

He had appreciated the book, he said, and had been surprised by its “breadth and openness.”

Then came the rather blunt question: “Mr. Ramadan, are you still a believer?”

He seemed unable to imagine that a believing Muslim could be open to other horizons: looking through his own window he had confined the “Muslim intellectual” into what he saw as the obligatory frame, with its cut-and-dried certainties that a priori rejected rational criticism and could thus only be imposed on others.

The critical remarks that have appeared following publication of the English edition were eerily similar: the book’s subject—and its objectives—were set aside, replaced by what the critic knows, and therefore expects, from a “Muslim intellectual” like “Tariq Ramadan.”

As for “Ramadan”, he cannot quit his assigned “niche” without being assailed by the vigilant critics who know his true intentions.

A recent commentary in The Independent, written by an atheist, left-leaning critic disenchanted by the “ideology of multiculturalism” reflects such an attitude: a (so called) “Muslim thinker” should write only about very specific subjects, and if he fails to do so his intentions are necessarily suspect.

He is expected to write about secularism, the Islamic penal code, about Muslim women’s rights and about the headscarf or burqa, about equality: a convinced Muslim who does not speak of these things is attempting to mislead by using vaguely poetic and philosophical language.

Worse, his primary intention is to subject reason to faith, which, even more necessarily, must reign supreme for all Muslims.

So, neither the substance nor the objectives of my book are of interest to the critic in his conviction of what a Muslim thinker’s work must say.

Putting the book aside, he sets out to judge the author’s intentions.

Thus he projects, drawing on his own certainties, much more that he is prepared to find on the page, let alone attempt to understand its motivation.

We encounter the same attempted categorization in The Guardian, whose critic, in his opposition to the utopias of humanism and of religions, takes great liberty with the “Muslim” author’s intentions; the author should, in his view, focus on the stoning of women and homosexuals because a Muslim who wishes to speak clearly must necessarily take up these subjects.

So biased is the critic’s view that when I suggest that we move beyond tolerance and toward mutual respect, the critic tendentiously—ludicrously—claims that we must then “respect Holocaust deniers.”

The implicit suggestion that “Muslims” may be among those deniers turns out to be quite explicit.

Perhaps most surprising of all is the apparent inability of many critics to put their own prejudices aside.

I analyze this question in my book, where I question the “dogmatic mind” that perceives reality from the sole perspective offered by one’s narrow window, and that leads to binary relationships based on the distinction between “us” and “them”.

Were a “Muslim” intellectual from among “them” to dare to use “our” categories he becomes immediately suspect for having blurred their established boundaries.

In fact, these criticisms tell us far more about their authors than about the book itself. They must find it difficult to accept that a Western Muslim is able to master and to debate the themes and the categories, and employ the terminology of both Western and Eastern philosophy.

However, that was precisely my object.

I invite the reader to step back from his window, to question his viewpoint and his judgments, even at the risk of losing his bearings.

Prisoners of their certainties about what a “Muslim intellectual” is entitled to be and to say, some critics have evaluated the book on the basis of their preconceived opinion of its author.

At which point it becomes a mirror placed directly in front of their window reflecting what they already think.

Not terribly interesting, but how revealing of the trend that is now sweeping the West, on both the Right and Left of the political and/or religious spectrum: a Muslim who rejects his status as “other” must be either ignorant of himself or dangerous to “us.”

He can only be slippery, ill intentioned and, naturally, “controversial”. The temper of the times.

But the book has surprised many readers, in ways both positive and profound.

Without accepting fully its premises, they have joined me on a philosophical journey toward self-questioning, toward debate and the opening to pluralism and diversity.

Above all because they were themselves ready to begin the journey.

They have raised criticisms, both positive and negative, while remaining open to the book’s purpose.

Such open, critical readings reinforce my optimism about the future of our pluralist societies, as against the hasty dismissals of certain intellectuals and critics trapped in their certainties, ready to insist that an intellectual they describe as “Muslim” must either speak of Islam or hold his piece.

That particular view has happily had its day.

That some people would continue to propound it is worrisome, even dangerous. But they already belong to the past.