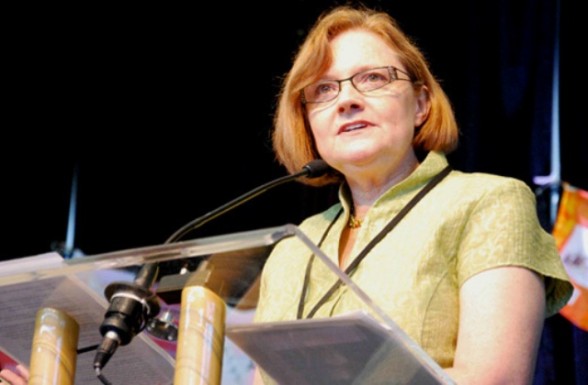 By Mardi Tindal, Moderator of The United Church of Canada

“Do you have any balloons?” asked the little boy, looking directly at me.

The women beside me would have looked far more familiar to him.

Each was wearing a hijab as we chatted beside a display table at an Eid celebration last Friday.

My head was uncovered and I was wearing my big beaded cross necklace.

But apparently the boy didn’t discriminate: we all looked like good balloon prospects to him, i.e. kind, mothering types.

And he was keen to add to the many bright, floating balloons throughout the large room.

This was one of many moments when I felt fully welcomed and included at the huge, festive Eid celebration at Exhibition Place in Toronto last Friday.

About 4,000 people of all ages filled the room for prayers and a sermon (plus dozens of us who were invited guests).

Following prayers were speeches from visiting dignitaries, and then wild and wonderful celebrations expected to attract 15,000 participants by end of day. (Many were attending morning prayer in their own mosques and would arrive here after work.)

I was standing at the table with Asma Ali, a wonderful young woman who works with youth on behalf of the Muslim Association of Canada.

Asma had invited me to join her for interviews with CTV and local television programs, and we were waiting for the reporters.

She and I had had a lengthy conversation.

She spoke of her anguish about the effect of last week’s events, sparked by the attention given to Pastor Terry Jones, on the youth of her community.

She expects leaders in her own faith community—and others—to speak clearly about how the Qur’an is a beautiful book of peace—and that it is the pursuit of peace that joins us across our religious communities.

We both see the healing of community and creation as part of that peace.

United Church members and leaders have studied and pursued Christian–Muslim understanding for years.

Asma wasn’t surprised to learn about this as she and others told me of how they see the fruits of that intention.

They described good relationships between their mosques and United Church congregations, and named United Church friends in their communities. (I don’t suppose they would have mentioned their disappointments to me on such a celebratory day.)

So I gave the media interviews and returned to the office to issue a statement.

A number of you had asked me to join the chorus of those denouncing Pastor Jones. I appreciate your concern.

However, I chose not to mention him (he’d had enough attention in my opinion), and to speak instead to the urgent need to stay the challenging road of mutual respect and understanding.

After seeing one of these interviews on a local television station, a 26-year-old friend of my son who has no particular religious affiliation commented on Facebook that it was nice to see someone talking about interfaith relations in this climate of suspicion and intolerance.

Many of you are talking about and doing good things for the sake of interfaith relations, the work of God’s healing of community.

Never underestimate the importance of your efforts!

The events of last week underscore the urgent need for us continuing to develop and deepen our relationships with our neighbours of many faith traditions.

We know that it takes prayer to open hearts for action.

As Asma said last Friday, “If your heart is open, you will find the truth.”

Each invited guest left the Eid celebration with a gift: a prayer mat.

May we keep praying and acting together for the healing of all God’s people, for community.

May we keep standing together and adding to celebration.

How are you and your congregation pursuing peace with people of other faith communities?