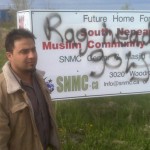 (April 30, 2010) – A sign on the land of the future site of a mosque in the Barrhaven area was vandalized with racist graffiti Thursday night.

The South Nepean Muslim Community in the Ottawa area is planning to build a mosque on the 1.3 hectares of land at 3020 Woodroffe Ave.

The messages — “F*** Muslims,” “Ragheads Go” — and a swastika were spray painted onto the sign.

The Canadian Council on American-Islamic Relations condemned the act urging local authorities to investigate the incidents as possible hate crimes and to bring the perpetrators to justice.

“This week two separate incidents of Islamophobic graffiti were perpetrated at mosque sites in Ontario: one in Ottawa and the other in Pickering,” said CAIR-CAN’s executive director, Ihsaan Gardee.

“While each of these incidents, including similar ones at mosques in Hamilton, Calgary, and Waterloo over the last 4 months are deeply offensive we do not believe they represent the sentiments of the vast majority of Canadians. We are encouraged by the response of our fellow citizens who have come forward with their support and unequivocally denounced these cowardly acts,” said Gardee.