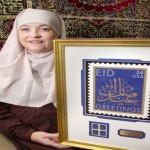 Aminah Assilmi and her son were in single car accident just outside of Newport, Tennessee where she had been living for just over a year.

The car accident happened just after 3am and it appears that Assilmi was killed instantly.

“To God we belong and to Him we return,” said CAIR National Board Chairman State Senator Larry Shaw (NC). “We ask God to shower His mercy on Sister Aminah and to grant her loved ones strength and patience in this time of sorrow.”

Assilmi who was 65, served as the Director of the International Union of Muslim Women.

She was an internationally-respected author, an advocate for women’s rights and a renowned speaker on Islam.

Despite health issues, Aminah Assilmi maintained a rigorous schedule of speaking engagements around the nation and the world.

She was instrumental in the U.S. Postal Service’s 2001 issuing of the “Eid” stamp, which marks the two main Muslim holidays.

Her current project included a Center for Muslim Women’s Studies that would serve as a resource center for new Muslims and as a summer camp for Muslim children.

Aminah Assilmi is survived by her daughter Amber, and sons, Whitney and Mohammad as well as several grandchildren.