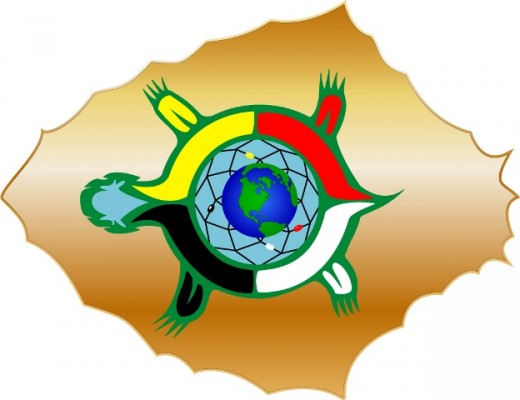 Turtle Island is an ancient land, place and people.

Canada, as an evolving reality, is rooted and nurtured by millennia of wisdom seeking, spiritual experiences, and a circular approach to thinking that remains open and inclusive.

Aboriginal Elders and peoples are the guardians of that legacy.

Islam speaks of a time in the pre-creation, when all human beings that would ever be were gathered in the presence of the Creator.

He presented Himself and all present acknowledged Him as their Master and Sustainer.

This awareness is preserved in all human creation until this day, although many push it away, ignore the memory, and cover it with darkness.

In this experienced reality, all Aboriginal peoples are our family, our brothers and sisters.

Islam teaches us that there was one original man who submitted to the Creator and received knowledge and the names of all the beings of the Earth community.

There were spirit beings present, whose original substance was light. They expressed dismay that a creature made from clay of the Earth would cause bloodshed and destruction. But they submitted and bowed to the Creator’s will and accepted His purpose.

All human beings that are today, that have ever been or ever will be, are descended from the first man and the first woman that was created to complete him, be his partner, and together to become the first family.

Aboriginal peoples are also descended from that family. They are part of our family and they are our brothers and sisters.

One being was present, however, who stood in high rank. This creature’s origin was energy or smokeless fire. He was arrogant and rejected the creation of the first Man, swearing perpetual warfare, ambush and slaughter of humans. Until today, he is a liar and works through deception, cunning and deceit. He refused to accept the creative act of the Great Spirit Who is One, Unique, and Undivided.

This smokeless-fire-being’s punishment was decreed on the spot, but he begged for a delayed execution. He is the source of much misery, corruption, darkness and bloodshed on the Earth, even until today. His prime objective is the destruction of families by breaking apart the love and respect between husband and wife, mother and father. He does nothing of his own power, although he contrives to appear all powerful.

The Great Spirit has created and sustains everything, is within and without this creation, and He has extended His Mercy and Love over every part whether human, plant, animal, spirit beings, or the substances that make up the very Earth itself.

He does not sleep. He does not tire. He has no beginning and no end. He is, and at the same time, He is the source of all. He is the Creator and He is not created, nor is He limited by time or what He has created. He is closer to His human creations than the jugular vein.

He has given the human family and the spirit family guidance from His knowledge, wisdom, and purpose.

All the rest of creation has guidance embedded in their nature. And they offer up continual prayers of thanks and worship. Humans and spirit beings alone have free will to acknowledge our Creator, or to rebel – to do good or evil. We earn our own rewards or punishments in turn.

Although we have been created to be forgetful, we are given reminders if we are willing to listen and see. We are given the signs that are found in Nature and in the perpetual worship by other members of our Earth community.

We have also been given guidance in the lives, words, and teachings of prophets and messengers that the Creator has sent to all the nations and tribes of the Earth.

Our Elders and scholars are men and women that can read the signs of the creation, and that remember the teachings and life examples of the prophets and messengers. They can read the books and bring the guidance that is needed for each generation. They understand the wisdom of righteous living that begins by giving respect.

Islam is a way of life that listens for the voice of the Creator in the Earth community, and in direct messages from the Creator. This way has etiquettes and protocols for living in a balanced and respectful manner. It is value based and family oriented. Lived properly, life becomes a continuous prayer of remembrance, thanksgiving, and submission to the Creator and His will in all things.

A Muslim is one who chooses to live this straight, balanced, respectful way, and who associates nothing and no one with the unique and inimitable Creator – the Great Spirit.

The Great Spirit has many names. One very personal name is Allah.