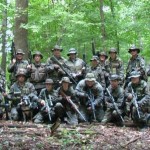 Exceptionalism is alive and well when it comes to reporting on violence in the name of religion, as evidenced in the recent case of the Michigan-based Hutaree, a group that the media has labeled a militia following recent FBI raids that uncovered stockpiles of illegal weapons, and a plot to kill law enforcement officers and “levy war” against the United States.

The leader of the group, 45-year-old David Brian Stone, pulled no punches about who he was, coining the term “Hutaree” which his website translates as “Christian warrior” for his group. His motto is the biblical passage John 15:13: “Greater love hath no man than this, that a man lay down his life for his friends.”

The behavior of this group seems very similar to that of those termed terrorists by the media.

Yet Joshua Rhett Miller of Fox News described the Hutaree in a 29 March story as a “purportedly Christian-based militia group.” In a similar vein, Nick Bunkley and Charlie Savage of The New York Times identified Stone and the Hutaree somewhat apologetically as “apocalyptic Christian militants” in their 29 March report. This, despite the fact that the group not only stockpiled weapons and engaged in training identical to Al Qaeda’s modus operandi, but even planned improvised explosive devices based on those used by terrorists in Iraq.

In its “Times Topics” section, The New York Times positively contorts itself to avoid using the word “terrorist”. It describes the Hutaree as a “Michigan-based Christian militia group” and, mirroring the language of US Attorney General Eric Holder, as “anti-government extremists.”

Are we reserving the term “terrorist” only for Muslims these days? In coverage of stories like the thwarted plan to bomb synagogues in New York in May 2009 or Umar Farouk Abdulmutallab’s attempt to blow up a plane over Detroit, the mainstream media has no qualms about discussing “foiled terror plots.” Such a reservation stokes indiscriminate fear of Muslim “others”. It also constructs an implicit “us versus them” dualism between a broadly “Christian America” and an allegedly monolithic “Muslim world”, as American political scientist Samuel Huntington most notoriously opined in his “Clash of Civilisations” theory.

Religion is all too often seen as the root of terrorist violence, rather than as one of its most effective tools. As Scott Shane argued in the 4 April New York Times article “Dropping the word bomb”, we need a robust debate about what terms to use across cases. Journalists can help by practicing consistency, and by pointing out attempts to scapegoat one group and exempt another from the opprobrium associated with terms like “terrorist.”

Mainstream Christians like me cringe when a group like the Hutaree is identified as “Christian”. Perhaps this incident can help other Americans empathise with what close to 1.5 billion Muslims might have felt every time in the last few years they have heard the words “Muslim terrorists” or, far worse, “Islamic terrorists”.

And that means calling a terrorist – of whatever background – exactly that.

Jon Pahl (jpahl@ltsp.edu) is Professor of History of Christianity in North America at The Lutheran Theological Seminary at Philadelphia, and author of Empire of Sacrifice: The Religious Origins of American Violence. This article first appeared in The Colorado Daily and was written for the Common Ground News Service (CGNews) www.commongroundnews.org