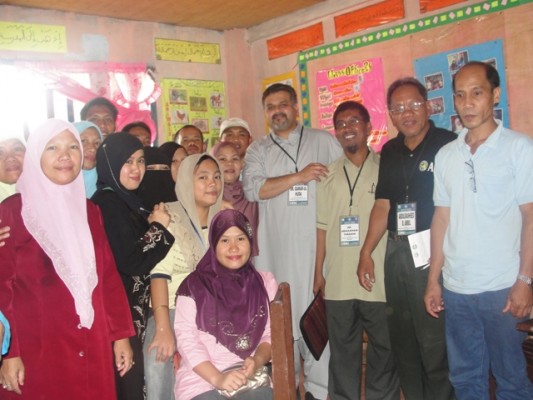 By Amina Rasul and Qamar-ul Huda

In this age of widespread misperceptions that Islam is a religion of violence and intolerance, an Islamic peace education curriculum, addressing peacebuilding from an authentic Islamic perspective, is essential.

A group of 35 Muslim educators from eight countries came to Mindanao, the second largest island in the Philippines, in the last week of June for an international workshop on Islamic peace education. They discussed various models and approaches to Islamic peace education, which are currently being employed by Muslim teachers in some classrooms around the world.

Members of the Philippine Center for Islam and Democracy (PCID), who organised the workshop with the United States Institute of Peace, noted that while peace education is an established field and discipline, Islamic peace education is a fairly new and innovative subject for Islamic educational institutions.

Islamic peace education is founded on the philosophical, scriptural, theological and ethical principles of peacemaking by the Prophet Muhammad, his family, his companions and dynamic historical figures from Islamic history. While there are similarities to Western approaches to conflict resolution, Islamic peace education and peacemaking efforts take into account the spiritual and religious dimensions of actors, who are able to transform themselves and the community at large away from conflict toward harmonious relationships.

Noting that most peace education programmes in the Philippines were either Christian-centric or based on Western approaches, Dr. Aida Macadaag of the Mindanao State University claimed that these approaches did not resonate with Muslim students. But, she added, Islamic peace education curriculum was effective and making an impact because it is rooted in the Islamic tradition and builds upon cooperative learning methods, reflection sessions and group development.

Dr. Lili Munir of the Jakarta-based Center for Pesantren and Democracy, an organisation working to engage students in pesantren (religious schools) into positive agents of social transformation, discussed the importance of using the local cultural context in which Islam is understood and practiced to teach peace education to high school and religious school students. Munir said, “Islamic peace education is a holistic approach to transforming a culture of violence into a culture of peace.”

Dr. Asna Husin, Founder of the non-governmental organisation Islamic Peace Education related how she cooperated with a local religious scholars council in Aceh to write a peace manual for both public high schools and Islamic religious schools. Husin organised an advisory council of leading religious scholars to supervise the implementation of the project.

The PCID textbook, Islamic Model for Peace Education, was inspired and guided by Husin’s project. Many Filipino religious and public schools with Muslim students now use this textbook to teach Islamic peace education.

Qari Muhammad Haneef Jalandhari, president of a prominent religious school in Pakistan and Chairman of the World Council of Religions, said that “peace education will be the primary way to deal with radicalism, extremist thinking and intolerance. If we are serious about eradicating poverty and illiteracy, then we must heavily invest in peace education programmes in [religious schools] and in public schools.”

But religious schools in the Muslim world are not the only ones implementing an Islamic peace curriculum. Hajar Alkutany of the International Forum for Islamic Dialogue in the United Kingdom presented her Islamic peace education programme, Success in a Changing World, which empowers British Muslim youth to reframe their conceptual approach to Islam by exploring different cultural, civilisational, religious, social and political aspects of Islam.

There were intense exchanges on how Islamic peace education can provide real problem-solving skills to students and ways in which students can apply skills to critically analyse their life challenges. Some participants argued that an Islamic peace education curriculum should be mandatory for all Muslim students so that they can identify reasons for violent conflict and formulate non-violent solutions to complex problems in their local contexts.

According to Rahayu Mohammad, Programme Director and Curriculum Developer for IQRA’ ASIA in Singapore her experience in implementing peace education in religious schools in the country has resulted in cultivating tolerance, an Islamic identity of civic engagement, an ethos of pluralism and a sense of being caretakers of the world.

The workshop was the first of its kind, bringing together Muslim educators who teach peace education from an Islamic perspective. There was an appreciation of the diverse approaches and methods educators use, as well as an understanding of the serious challenges teachers face while operating within their own institutions to adopt peace education. The group hopes to eventually formalise a professional society to support Muslim peace educators and their pursuit of teaching peace.

* Amina Rasul is the Lead Convener of the Philippine Center for Islam and Democracy and Co-Founder of Muslim Women Peace Advocates. Qamar-ul Huda is Senior Programme Officer at the US Institute of Peace and editor of Dove and Crescent: Peace and Conflict Resolution in Islam (USIP Press, 2010). This article was written for the Common Ground News Service (CGNews).