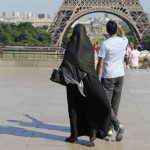 Even as a Jew in New York, I know what it is like to be Muslim in France.

While studying abroad in the French city of Strasbourg in 2007, I decided to grow a bushy beard. Little did I know that in France only traditional Jewish and Muslim men don anything but the most finely trimmed moustache or goatee. Since I did not wear a yarmulke or other head covering, people who saw me on the street assumed that I was Muslim.

I felt that police officers and passers-by treated me with suspicion, and even on the crowded rush hour bus few chose to sit next to me if they could avoid it. On one occasion someone followed me home and tried to start a fight, only to find I was a bewildered American, not a French Muslim.

Never before, and never since, have I experienced disdain of this sort. On a daily basis, I was made to feel badly because of my appearance-and what was presumed to be my corresponding religious affiliation. So when I read of the impending effort by parliamentary leader Jean-François Copé and his supporters to criminalise the burqa (and other garments that fully cover a woman’s body, head and face) in France, I understood it to be far more than a measure to protect women’s rights or preserve the concept of a secular society, on which the modern French state is built.

In my opinion, it is easy to see how the “burqa ban” might be misused as a part of a broader effort to stigmatise a religious population, one that already perceives itself to be on the margins of society.

Admittedly, I am fundamentally opposed to any garment or religious practice-including those found in my own Jewish tradition-that suggests women hold a different or subservient position than men. But the burqa ban in France will not achieve the aim of gender equality. If anything, it will strengthen religious conservatives in France’s Muslim population by convincing members of the moderate majority of Muslims that the rest of French society will never accept them.

While there are said to be only 2,000 women who wear burqas in all of France today, the entire Muslim population, estimated to be around five to six million, will take umbrage at another measure that singles out their community.

If we assume that French President Nicolas Sarkozy is genuinely motivated by the belief that burqas are a “sign of subservience, a sign of debasement,” according to the 16 January edition of The Economist, his best response would in fact be to enact measures welcoming Muslim citizens more fully into French society. Such affirmations would undercut efforts by the small minority of religiously conservative Muslims to gather a following among disaffected coreligionists who feel unable to overcome anti-Muslim prejudice.

The need for the French government to treat religious minorities with respect is bolstered by its own history. In 1781, the enlightened German thinker Christian Wilhelm von Dohm made what at the time was a revolutionary suggestion: “Certainly, the Jew will not be prevented by his religion from being a good citizen, if only the government will give him a citizen’s rights.”

But it was the French who first put Dohm’s prophetic vision into action.

In 1806, French emperor Napoleon Bonaparte emancipated French Jews by passing laws to improve their economic and social status. He invited them to live anywhere they pleased, as opposed to confinement in crowded city slums and frequent itinerancy in the countryside. He also officially recognised their religion and affirmed its permanent place within the private sphere of French life.

Through these acts of profound tolerance over 200 years ago, France set an example for all of Europe and proved that its open-mindedness was more than rhetorical.

Modern France would do well to follow its own admirable example and truly treat Muslim citizens as equal participants in society. Foregoing the burqa ban would be a sensible first step.

Joshua M. Z. Stanton is co-editor of the Journal of Inter-Religious Dialogue (www.irdialogue.org) and a rabbinical student at Hebrew Union College in New York City. This article was written for the Common Ground News Service (CGNews) www.commongroundnews.org