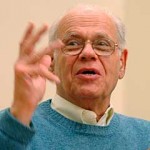 On Friday, February 12, 2010, Professor Gregory Baum from the Centre Justice et Foi and McGill University delivered a public lecture at the Waterloo Lutheran Seminary at Wilfrid Laurier University in Waterloo, ON.

The title of his talk was Islam and Democracy: A Catholic Perspective on Reform and Renewal, which is based on his cr itical analysis of the scholarly work of Professor Tariq Ramadan.

Professor Baum based his lecture on his latest book, The Theology of Tariq Ramadan: A Catholic Perspective.

The Reverend Dr. David Pfrimmer welcomed the attendees to the lecture and invited Dr. Scott Kline from St. Jerome’s University (a public Catholic university affiliated with
the University of Waterloo) to introduce the speaker.

Professor Baum started his talk by saying that his interest in Ramadan’s work started when he recognized the high unemployment rate among Muslims in Montreal compared to other faith groups.

He was troubled by this finding and was “deeply hurt” by the discrimination and prejudice that Muslims face.

He said that the news, press and TV coverage against Muslims have negative effect on their economic status.

Stemming from his sense of “solidarity with Muslims”, Professor Baum associated himself with Presence Musulmane in Montreal, which is a group of Muslim citizens who follow the ideas of Tariq Ramadan.

Professor Baum took on the task of reading Ramadan’s books and articles, watch his TV interviews, and listen to his lectures when Ramadan visited Montreal.

He also read the published work of Ramadan’s critics.

Professor Baum concluded that those who criticize Ramadan have not read his scholarly works.

Critics misquote Ramadan often by taking his ideas out of context.

Hence, Baum devoted his latest book as a defense of Ramadan.

Professor Baum said that religion in general is challenged by modernity that emphasizes concepts such as human rights, democracy, freedom of religion, and freedom of press.

He said that Catholics in the 19th century rejected these ideas and demanded of believers to be faithful to the king or prince.

Such encounters forced Catholic thinkers to re-read their Scriptures in light of the reality the believers are faced with.

He said that Muslims struggle now-a-days is similar to what Catholics went through.

This struggle started by the end of the 19th century, when Jamal Al-Afghani was openly critical of the Ottoman empire’s policies and called for reform.

Professor Baum said that Professor Ramadan locates himself within this reform movement.

Ramadan identifies himself as a Western Muslim who concerns himself with how to be a faithful and responsible citizen at the same time.

Ramadan does that by emphasizing the universal message of the Quran, which confirms and corrects previous revelations throughout human history.

Ramadan emphasizes that revelation and reason are in harmony.

Ramadan defines “fitra” in the Quran as the orientation of humans towards the Divine, which originates from the “breath of God” that completed the creation of humans.

This “breath of God” remains in people and with people, and using their intelligence, they will be able to recognize good and evil.

Professor Baum said that when he reads Ramadan’s definition of fitra, he is reminded of early Christian theology that the Grace of God is in all humanity.

Professor Baum then moved to the topic of how Ramadan is encouraging Muslim to use the universal message of Quran to interpret Sharia, by using certain interpretive principles:

1) taking into account the context in which verses were revealed

3) respecting the laws of the land and contracts that Muslims make when they go through the process of visiting or immigrating to western countries.

Professor Ramadan also calls on Western Muslims to cease thinking of themselves as minorities by emphasizing that they can remain faithful to their traditions and also integrate in the wider society.

This is similar to Jewish communities who are perfectly integrated and also able to preserve their religious identity and traditions.

Professor Baum also noticed that arguments made by Islamic extremists are similar to those by Catholic extremists.

It is based on literal readings of the scriptures and interpretations that help their political agendas.

He invited Christians to reread their books and look deeply for verses that promote religious pluralism.

He noted that Ramadan defends the freedom of choice for women when it comes to the issue of the veil.

It should not be the State or the Community who impose the veil on women.

Professor Baum clearly said that he supports Ramadan in his defense of women’s choices.

He noted that the issue of imposing the veil is similar in Catholicism, where the Sisters dress code in Churches has to be approved by a “bunch of guys”.

Professor Baum concluded the lecture by saying that Ramadan is an academic and a “pastor”, who concerns himself with ordinary Muslim people (especially Western Muslims), and wants to help them recognize and understand their religion.

During the Q&A session, Prof. Baum was asked of his view on inter-religious dialogue.

He said that he supports them when their objective is to find common ground, and not to decide who’s right and who’s wrong.

He added that these dialogues are important when effort is made to understand the other and discover their views and insights.

He said that we should approach interfaith dialogue as a “exercise of love” in the sense that we make the effort to put ourselves in the shoes of the other to know them better.

Such interaction imposes on those involved to look at one’s own tradition with a different eye and encourages one to re-read it and re-posses it.

Professor Baum ended by saying that the question on his mind now is can there be a dialogue between believers and non-believers?

He believes that yes, it could happen, especially when (1) it occurs between those who respect religion for its positive influence on people, (2) the objective is not on who’s right or wrong, and (3) it is on issues related to the ones that touch us all that include ecology, peace, and justice.

The organizers thanked the speaker and presented him with a gift.

Professor Baum was available after the talk to briefly meet those who attended and wanted to thank him in person. He signed my copy of his latest book.

Overall, Professor Baum was a gracious and inspirational speaker whose positive energy was felt by all who attended.

He emphasized “religious solidarity” many times in his talk. I feel lucky to have met him in person and heard directly from him his analysis of Ramadan’s work.

Professor Baum’s lecture was taped and it will be uploaded on the Seminary’s website for people to download.