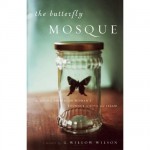 G Willow Wilson’s hotly anticipated ‘The Butterfly Mosque: A Young Woman’s Journey to Love and Islam’ comes out in June.

The extraordinary story of a young North American’s conversion to Islam and her ensuing romance with an Egyptian man, The Butterfly Mosque is a stunning articulation of a Westerner embracing the Muslim world

After graduating from university, Willow Wilson, a young American — and newly converted Muslim — impulsively accepts a teaching position in Cairo.

There, she meets Omar, a passionate young nationalist with a degree in astrophysics.

Omar introduces Willow to the bustling city, and through him she discovers a young, moderate nationalist movement, a movement that both wants to divest itself of western influence and regain cultural pride.

When the two find themselves unexpectedly in love, despite their deep cultural differences, they decide that they will try to forge a third culture, a new landscape that will embrace some of each of their cultures, and give their fledgling romance some hope of survival.

Wilson weaves this engaging personal story with deep insights into faith in a fractured world, and gives westerners rare insight into an important young reform movement.

The Butterfly Mosque is an inspiring account of an unlikely cross-cultural love, and the moving story of two young people working within the boundaries of contemporary religion and culture to

Wilson divides her time between Egypt and the US.

Her articles about modern religion and the Middle East have appeared in publications including the Atlantic Monthly, The New York Times Magazine and The Canada National Post.

Willow was born in New Jersey in 1982, and later moved to Colorado.

She began her writing career at 17, when she freelanced as a music and DJ critic for Boston’s Weekly Digg while a student at Boston University.

After graduating with a degree in History and coursework in Arabic language and literature, Willow moved to Cairo, where she became the first western writer to interview Sheikh Ali Gomaa, the current Mufti of Egypt and one of the most influential clerics in modern Islam.

She was a regular contributor to the Egyptian opposition weekly Cairo Magazine until it closed in 2005.

An avid supporter of new and alternative media, Willow has written for politics and culture blogs from across the political spectrum, including Eteraz.org and Dean’s World.