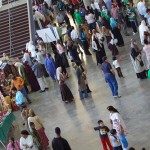 (July 14, 2009) – MuslimFest has announced that this year’s festival will include a Writers Expo.

“For the first time in Canada you will witness Muslim writers from various genres and media at one place,” MuslimFest announced on its website.

“Through this pioneering expo we will celebrate the art of writing, as well as, the writers in the Muslim community in North America.”

This year’s festival will include a comedy show, The Muslim Funnymentalists, featuring ‘An African American Actor, a Confused Arab, a Jewish Rabbi, an Iranian Video Blogger, and 2 crazy South Asians,’ according to the show’s website.

Further information on the 2-day event can be found at the MuslimFest website www.MuslimFest.com