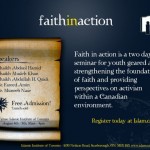 (August 4, 2009) – Freedom of conscience and freedom of religion are what makes being a Muslim in Canada great, according to youths who attended a gathering today at the Islamic Institute of Toronto.

The young Muslims are taking part in a 2-day program being held at the east Toronto institution with the theme, ‘Faith in Action.’

The participants were asked to respond to three questions as part of an interactive forum in an effort to encourage active dialogue on what it means to be young, Muslim and Canadian.

“It is important for us to become engaged in reflection and dialogue on what being a young Canadian Muslim entails,” Muneeb Nasir, the workshop coordinator, told the participants as he asked them to discuss the questions in groups.

When asked to list the things that make being a Muslim in Canada great and why is it important that they not lose them, the group of mostly senior high school and university students, promptly responded by listing many of the fundamental freedoms in the Canadian Charter of Rights and Freedoms.

They felt that the freedom to choose and to worship were rights that were important for them to practice their faith and which they would not like to loose.

When asked to identify some of the challenges facing young Muslims, parental pressure, navigating between their religion and culture, and keeping away from ‘temptations’ were some of the prevalent responses.

The participants were quite passionate when they were asked to offer advice to Muslim organizations to improve youth involvement in the community and society.

The youths felt that Muslim institutions have become primarily prayer spaces and do not offer much to young people.

They unanimously said that youths should be recruited to organize and plan youth programs and, that such programs should be more engaging, combining learning and recreational activities, as well as, include sessions on ways to contribute to society.

Less reliance on lectures and having more interactive sessions, and including women and youth speakers were other recommendations.

Female participants strongly voiced the desire for Muslim organizations to be more inclusive of women and more welcoming to all people.