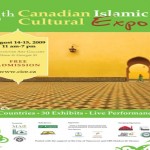 (August 19, 2009) – Thousand of people attended the Fifth Canadian Islamic Cultural Expo that was held in Vancouver on August 14 – 15 to promote a better understanding of Islamic culture, history, innovation and civilization.

The Annual Expo, which was spearheaded by the Vancouver based Islamic Information Centre and supported by other Islamic groups, began with the Friday prayers held outdoors at the Vancouver Art Gallery.

An estimated 1,000 Muslims attended the prayer service which was led by Imam Ali Meheri who told the gathering to “not listen to extremists” who teach that Muslims are locked in unavoidable conflict with the West.

“We decided on the goal of having 1,000 Metro Vancouver Muslims come together to pray to demonstrate the sense of Muslim unity we have in our community,” said Sana Siddiqui, a 21-year-old criminology student at Simon Fraser University and spokesperson for the Expo.

The attractions at the 2-day expo included more than 20 country-based exhibitions by local Muslim communities ranging from Fiji to Afghanistan, India to Saudi Arabia.

It also featured four themed pavilions taking visitors on a discovery of Islam and the contribution of Muslims to the sciences and technology; arts calligraphy, and architecture.

The ‘Muslims of Canada’ pavilion showcased the contributions of Canadian Muslims to Canada’s social and cultural diversity. Special posters made for the event provided information and surveys on Canadian Muslims at the national and provincial levels.

There were also speeches by local, provincial and federal leaders and several short lectures introduced Islam and its ethical foundations to the public.