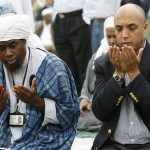 (September 25, 2009) – More than 3,500 Muslims gathered today on one of the nation’s most prominent stages to pray during a daylong display of national and religious unity organized by a New Jersey mosque.

Facing the U.S. Capitol and kneeling toward Mecca, 6,600 miles away, the assembled Muslims, mainly from the Northeast and the Washington, D.C., area, listened to Quranic recitations and a wide-ranging sermon on Islam, monotheism and relationships with non-Muslims.

“This is a great day for Muslims. A great day,” Hassen Abdellah, the president of the Dar-Ul-Islam mosque in Elizabeth, which organized the event, told the crowd. “Don’t be afraid to be Muslim in America because we have established that the Muslim community is a great community, a diverse community, a loving community.” (Source: New Jersey Real-Time News)