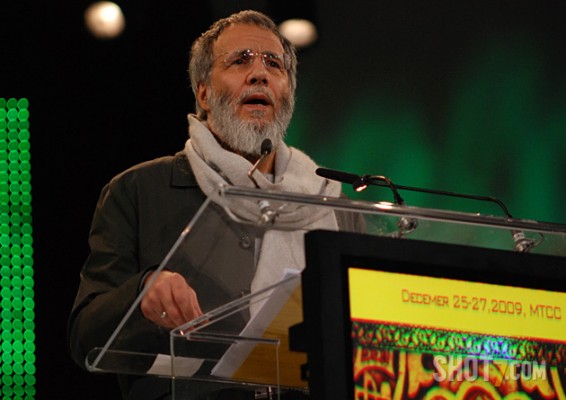 (December 31, 2009) – Speakers at a three day Islamic convention held in Toronto on the weekend (Dec. 25-27) urged Muslims to live up to their responsibility to save the world.

The Reviving the Islamic Spirit Convention (RIS), in its eighth year, was attended by more than 17,000 people from across Canada and some from the US and elsewhere.

The convention is unique as it is completely organized and managed by the youth.

The convention with the theme SOS: Saving the Ship of Humanity, hosted more than a dozen high profile speakers from the USA, Canada, and around the world.

Yusuf Islam, formerly Cat Stevens, was a main speaker at the event and spoke on the universal message of Islam.

Shaykh Abdullah bin Bayyah, the former minister of justice of Mauritania and a member of the Islamic Fiqh Council, said that Muslim youth must not forget the spiritual legacy of their predecessors bust must reconnect with that tradition.

Dr. Tarek Al Suwaidan, a leading scholar and public speaker from Kuwait, spoke on Islam and the modern world. He stated that scientific facts can never contradict Islam but scientific theories can. He said the distinction should always be kept in mind.

Shaykh Hamza Yusuf urged the assembled gathering to live up their responsibilities and fight for a sustainable and peaceful world. He said Muslims should shun bickering over minor issues and instead unite. He also said that Muslims should avoid indulging in takfeer of fellow Muslims.

Prominent Canadian politicians, including Derek Lee and Liberal Finance critic John McCallum, also spoke at the convention and appreciated the efforts of Canada’s Muslim youth to build an inclusive society.

As part of its social outreach the convention collected more than 1000 winter coats and close to 10,000 meals for the needy in the Greater Toronto Area.

The convention featured a large bazaar selling books, clothing, and other Islamic items.