(November 23, 2009) – Toronto’s Muslims will be distributing meat to needy and low-income families in the city as part of the celebration of Eid ul-Adha which takes place on Friday, November 27.

Eid ul-Adha (‘Celebration of Sacrifice’), also known as the Greater Eid, marks the end of the Hajj, the annual pilgrimage to Makkah.

The annual celebration is the world-wide commemoration of the spirit of sacrifice of the Prophet Abraham many centuries ago. In memory of this great act of faith, Muslims perform a sacrifice (Udhiya/Qurbani) and share the meat with family, friends and the needy.

Most Muslims in Canada tend to perform the Udhiya/Qurbani sacrifice overseas by contributing to a relief agency that would perform the sacrifice and distribute the meat on their behalf in a developing country.

Recently, there has been a growing awareness in the Muslim community of the need to help those living in poverty in Canada.

MuslimServ, a charity dedicated to helping the poor, will be collecting Udhiya/Qurbani donations to perform the sacrifice in the Greater Toronto Area for distribution to the food bank starting on Friday.

“Qurbani will be conducted by Muslims and cutting of meat will take place at a federally inspected meat packing plant,” according to the MuslimServ website. “It will have a label identifying it as halal meat and donated by Canadian Muslims.”

Meanwhile, the Muslim Association of Canada (MAC) and Muslim Students’ Association of the University of Toronto are coming together with Scadding Court Community Centre to celebrate Eid ul-Adha with a communal lunch and Eid party on Sunday, November 29th.

“We will celebrate this tradition by hosting an Eid party and distributing meat to pre-registered families from low-income housing areas in downtown Toronto,” according to Scadding Court Community Centre. 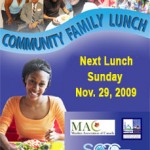 Founded in March 1975, Scadding Court Community Centre is located at the corner of Dundas and Bathurst streets and adjacent to the Atkinson Cooperative Housing Complex.