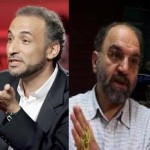 (October 29, 2009) – Thousands of religion scholars from North America and around the world will converge on Montreal, November 7 – 10, to discuss all things related to religion.

Some 4,500 scholars are expected to review the latest research in the field of religion at the 2009 Annual Meeting of the American Academy of Religion.

More than 400 meeting sessions are scheduled this year on topics such as Islam and modernity; the economy; biomedical ethics; politics; globalization and poverty; sports; world cinema; indigenous peoples; patriotism and the military; cognitive science; atheism and secularism; and more than 20 sessions with a special focus on Québec.

One session brings together two intellectual heavyweights in Muslim world, Abdul Karim Soroush and Tariq Ramadan for a conversation which will be moderated by Omid Safi.

Tariq Ramadan, Oxford University, will also deliver a plenary address on the theme, Contemporary Islam: The Meaning and the Need of a Radical Reform.

There will be a number of special topics forums including one on the theme, The Commission on Reasonable Accommodation in Québec: Reflections with Co-chairs Dr. Charles Taylor and Dr. Gerard Bouchard.

Another special topics forum features a Conversation with Zarqa Nawaz, 2009 AAR Religion and Arts Award Winner. Zarqa Nawaz is the driving force behind Fundamentalist Films and the creator of Little Mosque on the Prairie.

The meeting will include an impressive exhibition of more than 75 publishers, whose displays will create one of the world’s largest bookstores specializing in religion.

The publishers’ exhibits and the meeting sessions take place at the Palais des Congrès in Montreal.

The AAR, celebrating its 100th anniversary, is the world’s largest association of religion scholars with more than 10,000 members from some 1,000 colleges, universities, seminaries, and schools in North America and abroad.

Its mission is to foster excellence in the study of religion by promoting research, publishing, and teaching about religion in academia. Further information of the Annual meeting can be found at: www.aarweb.org