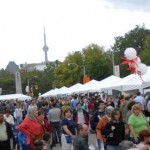 (September 24, 2009) – The Word On The Street will be offering plenty of special activities and events in celebration of its 20th festival this coming Sunday, September 27, 2009.

Every year on the last Sunday of September, in Vancouver, Kitchener, Toronto and Halifax, The Word On The Street unites the country in a national celebration of literacy and the written word.

Annually attracting more than 200,000 visitors to its Queen’s Park location, The Word On The Street in Toronto is the largest book and magazine festival in Canada.

Margaret Atwood will be headlining the Scotiabank Bestsellers Stage from 3 p.m. – 4 p.m.

It’s the first coast-to-coast book event in celebration of the release of her new book, The Year of the Flood.

Her appearance will be broadcast live to the sister events in Halifax and Vancouver, with audiences in each city posing questions to her, streamed live at www.openbooktoronto.com.

She will also be engaging in LongPen signings for these events. 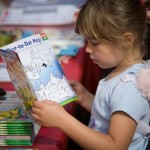 The 2010 Vancouver Winter Olympics are only a few months away. In celebration, The Word On The Street is hosting two Olympic athletes in partnership with Cheerios! Paralympian Josh Cassidy and rower Janine Hanson will be appearing in the Cheer Tent on KidStreet.

To celebrate The Word On The Street’s 20th festival, there will be two Literacy Murals at Queen’s Park: one beside Literacy Lane and the other at the south entrance to the park on KidStreet.

Contribute a “Loonie for Literacy” at either mural and you can share a favourite festival memory or make a colourful splash alongside autographs by the many authors who will be appearing throughout the day at the festival.

The Cooks ‘n’ Books Stage will feature food demonstrations by top chefs and a tantalizing array of samples.

The Money Matters Tent will cover all things financial from those in the know. 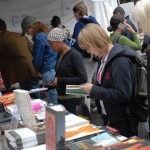 Garth Turner, John Lawrence Reynolds and Joseph Heath will explore the post-recession climate, while Angela Self of The Smart Cookies and Patricia Lovett-Reid of TD Waterhouse Canada will cover finances from a woman’s perspective.

20th Annual The Word On The Street