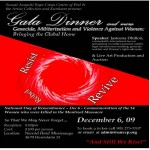 (December 2, 2009) – In a world where women are sensationalized on the runway and on screen and stories like Rihanna and Chris Brown are in the papers within minutes, there is a whole other world just waiting to be discovered.

It is the story of the everyday, average women who are kicked and left on the side of the road to die, after being stripped of all of their dignity or those that are left to rot in their homes after being physically abused to the point of straddling between life and death.

For these women, there is a very different story to be told, but are they given the voice to speak? Do we give them an ear, to hear to their woes? We all believe that violence occurs, and that women are often victim to crimes at the mercy of men. But very few of us are willing to take ownership of the issue, be it women or men; we often have trouble reflecting on what it must mean to go through such an experience.

So what is “violence against women” really? Who is experiencing it? And what can we do about it? These are some of the questions that begin to emerge in our minds, correct?

Well you will be surprised to know that violence against women is much more prevalent than we realize.

According to UNIFEM the (United Nations’ Development Fund for Women), violence against women and girls is a problem of pandemic proportions; both globally and locally. It takes many forms and occurs in many places — domestic violence in the home, sexual abuse of girls in schools, sexual harassment at work, rape by husbands or strangers, in refugee camps or as a tactic of war.

According to one statistic in a recently published fact sheet by UNIFEM “Violence against Women Worldwide”, an estimated 150 million girls under 18 suffered some form of sexual violence in 2002 alone. Another alarming statistic in this document mentions “among women aged 15–44, acts of violence cause more death and disability than cancer, malaria, traffic accidents and war combined.” With statistics such as these, it’s fair to say that many survivors are suffering, whether we chose to hear them or not.

Having had the privilege of volunteering my time at the local Sexual Assault/ Rape Crisis Centre, I have started hearing some of the stories emerging, but with stories come many emotions and a whole lot of tears. Words cannot even begin to describe the wounds that exist and the wrongs that need to be righted. Films like ‘Provoked and Heaven on Earth’, have certainly tried to depict what violence may look like, but there are plenty of “unsung heroines” that we turn our ears away from.

Well, no more. On December 6, 2009, on the 20th anniversary of the Montreal Massacre, as we remember the 14 women who were brutally murdered simply for being women, the Sexual Assault/ Rape Crisis Centre of Peel presents an opportunity to hear the real life stories that are collected on the field by Justeena Kaur Dhillon, a Genocide Watcher for the United Nations.

Don’t miss the opportunity to hear Ms. Dhillon give a historical narrative titled: “Genocide, Militarization and Violence Against Women: Bringing the Global Home”, that will illustrate the remarkable resilience of women globally in spite of the daily vulnerability to gendered violence and persecution that they experience in countries torn by conflict and right here at home.

An essential part of a “survivor’s” healing process is disclosure, but they are often shut down, and silenced, out of fear of being ostracized by the community and forced to push the anguish they feel deep inside of them. It’s very easy to say: “it’s over, forget about it”, but how can that happen, if they remain voiceless?

So what can be done? Organizations such as the local Sexual Assault/Rape Crisis Centre are key players in assisting survivors get past their trauma and live a relatively normal life once again. The crisis centre sees many women each month and provides them with 24 hour service, no matter how large or small the issue. But today, in light of the economic downturn and lack of resources for a growing need, the centre is at risk of shutting its doors forever and we need to do our part to prevent this from occurring.

It’s time we make a political statement! Violence against women is unacceptable, we are here to listen and take action! Please attend the gala and support this imperative cause.

*Farheen Khan is a community activist, writer and consultant (specializing in engaging diverse communities and resource development). She is a graduate of the CITY Leaders program through the United Way of Greater Toronto and is a graduate of the Maytree Foundation’s “Leader for Change” program. Her book titled “From Behind the Veil: A Hijiabi’s’ Journey to Happiness” is set to be released in March 2010.