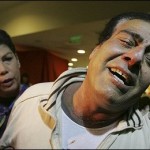 (October 7, 2009) – Izzeldine Abuelaish could be the loneliest man on earth.

A Palestinian father who lost three daughters when Israeli shells struck their home in Gaza two days before a cease-fire ended the war between Israel and Hamas, he seems to be the only person left in this small slice of the Middle East with its supersized servings of “us” and “them” who refuses to hate.

We met during my recent visit to Israel at the Sheba Medical Center at Tel Hashomer near Tel Aviv, where he works part-time as a physician but where that day he was not the healer but the father of a patient – his 17-year-old daughter Shadha whose eye was blown out of its socket and who lost several fingers in the shelling. (see daughter for life here)

“People asked me why didn’t you run away, but to where? Tell me one safe place in Gaza I could’ve gone to for shelter,” he asked me, as his eldest surviving daughter, Dalal, 19, handed out chocolates to celebrate Shadha’s recovery from surgery.

“Why should I leave my home? How many times in our lives as Palestinians must we leave our homes and why? My home was full of children armed with hope, love of the world and knowledge, who wanted to learn, live and build a future.”

He survived the shelling because seconds earlier he’d left the room with his youngest son in his arms. When he returned, Bisan, 22, Mayer, 15, and Aya, 14, were dead.

“My youngest son Hamad told me, ‘Dad, don’t be upset. Mum called them. She wanted them.’” Dr. Abuelaish told me, sobbing.

My attempts at condolence were woefully inadequate, so I just cried with him.

His 14-year-old niece Nour was also killed. Abuelaish said that just a few days before the shelling, she’d left the refugee camp where she’d been staying with her mother and siblings to join him and the extended family.

“She told me, ‘I’d rather die here than stay in the camp. We haven’t showered in 10 days. We don’t have any food; there are 30 or 40 people to a room. What kind of life is that? I’d rather die here with you all,” Abuelaish said. “She came to meet her fate.”

A Hebrew speaker, whose wails announcing the deaths of his girls on live Israeli television moved the presenters to tears, Abuelaish’s anguish translated Palestinian civilian suffering into a language that Israeli viewers could understand.

His grief marked the moment Al Jazeera and its unblinking and often overbearing war coverage entered their living rooms.

Up until then, most Israelis had been watching a very different war whose narrative, focused on Israeli soldiers as the nation’s sons sent to stem an eight-year tide of Hamas rocket attacks on southern Israel, was largely free of Palestinian civilian suffering in Gaza.

Did he hate Israelis?

“God forbid. I have never hated a person in my life. And I will never hate or bring up my children to hate anyone,” he told me. “I hate a person’s act, I hate the murder itself, the crime, but I never hate a person. Hatred is an illness.”

Abuelaish is a Palestinian who met Israelis on an equal footing – not as the labourers, gardener or cleaner but as the gynecologist who trained in two Israeli hospitals and at Harvard and who treated infertile Israeli women and delivered their babies.

He is a known peace activist whose deceased daughters had attended a peace camp for Israeli and Palestinian children.

And he is an academic who studied the effects of war on Gazan and Israeli children and whose own heartbreak has now ironically enriched his research.

He told me he was distressed that it was soldiers at the Erez checkpoint, who were the first Israelis his children saw when they left Gaza en route to Tel Hashomer for Shadha’s surgery.

Gadi Kenny, an Israeli peace activist who took me to meet Abuelaish, told me he thought the physician “can be the [Mahatma] Gandhi or [Nelson] Mandela or [Martin Luther] King we need so much.”

Indeed, Abuelaish has become a lightning rod for Israelis confused about a war both sides have claimed as a victory but the death toll of which underlines its essential asymmetry – some 1,300 Palestinians, including at least 600 civilians, and 10 soldiers and three civilians on the Israeli side.

Some, such as Levana Stern, the Israeli mother of three soldiers, one of whom fought in Gaza, tried to blame him for his own tragedy when she interrupted a news conference at the hospital to scream at the doctor that he must have been hiding weapons in his home or that Hamas must have used his house to fire at Israelis.

She later apologized and said she was sorry for his loss but that she still believed that Israel had fought a war to defend itself.

For others, Abuelaish’s grief has inspired unsettling questions about Israelis’ lack of compassion for Palestinians.

“When and how and why did we become so uncompassionate?” asked the weekly Tel Aviv Ha’Ir supplement. “Levana Stern didn’t attack [Abuelaish]. She was protecting herself from him… He threatened her view of Palestinians as terrorists.”

On the day we met, Abuelaish and his surviving children were buffeted by a group of Palestinian and Israeli friends; he the stalwart bridge, even in grief.

“I hope this is the last tragedy,” he told me. “We need to immunize our people with love, respect, dignity and equality. That’s the most important immunization that we need for both sides.”

* Mona Eltahawy is an award-winning New York-based journalist and commentator, and an international lecturer on Arab and Muslim issues. This article is distributed by the Common Ground News Service (CGNews)with permission from the author.