An Imam, a scholar, a leader, a role-model, a counselor – Imam Dr. Tawfik Muhammad Ali Shahin – sitting on the ground beside the pulpit, inscribed with the Qur’anic edict to send salutations upon the most beloved, wearing a white Detroit Tigers pinstriped baseball cap, shaking hands and greeting the congregation after a heart warming Friday afternoon sermon.

He stood tall and mighty with a mint green jubba over his clean white Egyptian-style gown.

His olive toned skin would often turn red when he spoke and his eyes always seemed to well-up behind his spectacles because of the sincerity and passion in his speech.

His hands were soft, like silk, to compliment his delicate demeanor.

My father’s heart was attached to the Masjid on North Western Avenue in Ottawa. 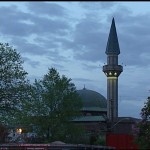 In those days it was simply referred to as “the masjid” or “the mosque” because there were no others back in the mid 70’s.

When the Imam arrived, as the first appointed Imam of the masjid, he quickly became close to my father who would often spend his Sundays cleaning the masjid. Imam Dr. Tawfik Muhammad Ali Shahin, born in Tanta, Egypt was an accomplished and accredited scholar from Al-Azhar University in Cairo.

He was a master grammarian with an impressive academic background.

We simply came to know him as “Imam”.

My brother, sister and I had the good fortune of being named by Imam when we were born.

In 1981 my family moved to Toronto, but always found ourselves back in Ottawa to spend the summers and holidays with our grandparents and other extended family.

Imam was part of this extended family.

There were times that our father would give my brother and I money to run and put in the large plastic margarine containers used as make-shift donation boxes.

As much as my father would try to conceal this act, being children we somehow found a way to cause a commotion and draw attention.

When Imam saw this, he too would extend his hands in his own pocket and call my brother and I over to make a similar deposit.

Imam somehow always found a way to acknowledge my father in the masjid even during the times he was on the pulpit and we straggled in late.

Be it a smile and a nod, or be it a clear mentioning of my father saying to the congregation “be like such and such…like fulan over here”, he knew how to make us feel special.

It was our sunnah to run up to him after the fard prayers of jumu’ah to hug, kiss, and shake his hands and then have him instruct us to go and pray our sunnah.

After our sunnah prayers we would come back to the circle of people sitting around him – and he would take my baseball cap and remove his blessed kufi to wear it instead.

Fridays after jumu’ah we never made any other plans because we knew that he would invite us over to his house for his famous mint tea and biscuits.

His house was always crowded with people after jumu’ah.

My brother and I were often tasked with the dishes.

I remember people used to come to his house and complain about their family issues, politics of the masjid, the khutba topics saying “you should be talking about this and that.“

My father would often become angry at the poor adab (manners) displayed in the Imam’s very house by guests, but there was little he could do.

It came to a point where the Imam had to plaster “no smoking” adhesive signs on the white walls of his own living room, because he was too shy to ask people to “butt out” himself.

Sometimes, the Imam would randomly call our uncle’s home (where we were staying when in town) and speak to my cousin saying, “is your family home tonight?“

My cousin would say, “yes, come on over“, and wouldn’t tell anyone that Imam was on his way.

About a half-hour later Imam would be ringing the doorbell with shopping bags bursting with fresh fruit in his hands and ready to spend the evening with us.

My family would scramble to make the house presentable for him and the first person ready would answer the door and welcome him in.

For us kids, you would think that our much anticipated evening of Nintendo or charades or other games would be a disappointing opportunity lost – but somehow his welcoming and nurturing presence made us want to sit with him among the adults despite often not knowing what they were talking about.

He would call us in Toronto to talk to my father, but first he would spend a few good minutes asking me about school and what I was learning during that particular semester.

He always asked about everyone in the family referring to my mother as “madame“. He used to tell my brother and I to take care of “his special friend” meaning our younger sister.

Years later, when I was in my teens and had friends who could drive, we decided to take a road-trip up to the official opening ceremony of the Kingston, Ontario masjid.

This later became a routine stop along our future drives to Ottawa and Montreal from Toronto.

The masjid dining hall quickly filled up with people as the anticipation grew for the masjid inauguration, when in walked Imam in his token mint colored jubba and red Azhari kufi with black tassels wrapped in a small white cloth.

Out of the hundreds of people there, it felt like he turned and immediately saw me.

I didn’t expect him to be there and it was like spotting my grandfather in a crowd.

He asked me “what are you doing here?”

When I told him that I had come up for the drive to witness the opening of this masjid I could tell that he was proud of me.

He dug down into his pocket and pulled out enough money for my friend to fill up gas and for all of us to have a bite to eat on the way back.

When Imam was in Toronto for conferences or programs, my father always fought to have him spend the night at our house.

Sometimes he had to stay at hotels or convention centers due to the nature of the program.

But most times he would give up the comfort and luxury of the fancy hotel rooms for the comfort of our humble little home to be around us and for my mother’s wholesome cooking.

My father would boast to us children about how Imam would be called on by judges to assist with matters before the courts relating to Muslim families.

It was awe-inspiring to see how he worked with leaders and communities of different faiths to bring about a mutual respect and neighborly relations.

He crafted out an identity for Muslims in a city that did not otherwise have one.

He was a man of the middle path that did not like confrontation, a real cornerstone and a pillar of the Ottawa community.

As Imam grew older his health deteriorated and he later moved into a Muslim apartment building where his duties diminished. He had become a frail man but kept his cheerful disposition.

Still, his apartment would have a constant flow of people coming in for all kinds of reasons. Some came to visit the sick, for advice, for guidance, to offer khidma, and for many other reasons still.

In April 1997, after years of declining health and a bout of illnesses, Imam Dr. Tawfik Muhammad Ali Shahin died.

My father was crushed when we gave him the news of Imam’s passing.

He was out of the country and deeply saddened that, despite trying to make efforts to return, he would miss the Imam’s janaza.

Before he could even instruct us to prepare for the road trip to Ottawa, my brother and I had already started preparing.

When we arrived at the Masjid – it felt so cold (despite being a warm day).

I didn’t know what to expect, but all I could remember is that when they ushered his blessed casket in from the back of the Masjid to the front, I was almost trampled by people rushing towards it to place their hands on it and invoke remembrance of the Almighty.

When I think back to all those times that my family enjoyed with him and all of the wonderful memories, we are comforted by the words of the Almighty “Verily the friends of Allah! No fear comes upon them, nor shall they grieve.”

Saints are the ones who are usually hidden from people.

We were fortunate to be among those who found one.

While we all pray for the closeness and intercession of al-Mustafa (s), there is always a hope in my heart that my family and I will be under the watchful eye and caring hand of Imam, on the day when the friends of Allah will be called upon and ushered to intercede for people.

There are many other memories that I have of him, but sometimes for things to remain special they must remain private.

Whenever I’m back in my hometown I make it a point to visit the masjid.

I find it difficult to look at the pulpit now, but still muster up enough courage to approach it and place my hand on it while saying a prayer for Imam.

When I pass by the donation boxes in the masjid now, it is impossible for me to put a single cent in there without giving it in his name.

As I exit the Masjid main doors and look to the right, I see the house where Imam lived and recall all of those memories of Friday afternoons in Imam’s kitchen.

The Sahabas used to remark that despite being part of a crowd of dozens or hundreds of people, when the Messenger of Allah (s) spoke he made each person feel like they were the most important person in that gathering. This is how Imam made us feel.

Ya Imam, as Salamu Alaik. You are loved, remembered, missed, and never forgotten. We love you and recite Fatiha in your name.