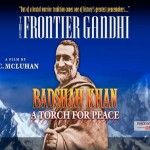 (November 3, 2009) – The Canadian premiere of documentary film, The Frontier Gandhi: Badshah Khan, a Torch for Peace, takes place on Wednesday, 4 November in Toronto at the International Diaspora Film Festival.

The film was the winner of the Best Feature Documentary, Middle East International Film Festival, 2009.

Born into Pashtun warrior society, Khan managed to raise a non-violent army of more than 100,000 men, women, and youngsters of various religions as he fought alongside Mahatma Gandhi for India’s independence.

He died in 1988 at the age of 98 having spent 35 years in solitary confinement for his efforts to humanize the world he inhabited.

His lifelong commitment to social justice, freedom and peace places him in that rarefied pantheon of peace figures that includes Nelson Mandela, Martin Luther King, Jr. and Mahatma Gandhi. Khan’s legacy offers a profound message of hope for these increasingly troubled times.

Following the screening at the Innis Town Hall, there will be a dialogue with Teri McLuhan, the film’s director.

She was born in Windsor, Ontario, and raised and educated in Toronto.

McLuhan has been a Visiting Scholar at Columbia University and currently resides in New York City.

She has written five books on sacred space and the core values of diverse cultures across the planet: Touch the Earth, Portraits from North American Indian Life, Dream Tracks, The Way of the Earth, and Cathedrals of the Spirit. Her films include The Shadow Catcher, a feature length documentary, and The Third Walker, a feature narrative film.

In Pashtun, Hindi, Urdu, Dari, and English with English subtitles