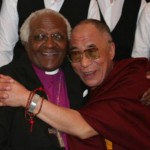 (September 27, 2009) – The Dalai Lama and Archbishop Emeritus Desmond Tutu were awarded the Fetzer Institute’s Prize for Love and Forgiveness on Sunday at the 2009 Peace Summit in Vancouver.

Each will receive a $100,000 monetary prize to support their work and they both were presented a handcrafted, inscribed journal.

The Archbishop Emeritus was unable to attend in person and his daughter, the Reverend Mpho Tutu, accepted the prize on his behalf.

The Institute’s Prize honors the courage and persistence with which the Dalai Lama and Archbishop Tutu have both worked to bring love, compassion and forgiveness to all that they do, as well as their ability to inspire these same impulses in others around the world.

“Love, compassion and forgiveness have the power to change, the power to heal and the power to transform any situation—no matter how violent or troubled—into something that is generative and life-giving,” said Tom Beech, president and CEO of the Institute.

“The Dalai Lama and Archbishop Tutu are renowned, revered, respected and loved the world over. In giving this award, the Fetzer Institute celebrates their humanity and the consistency with which their lives stand for compassion in the face of isolation, love in the face of fear and forgiveness in the face of violence.”

As part of the Fetzer Institute’s work to promote the awareness of the power of love, forgiveness and compassion, the Institute is the primary sponsor of the Charter for Compassion, a collaborative effort to build a peaceful and harmonious global community.

The Charter is the result of noted author and scholar Karen Armstrong’s one wish to change the world.

The Charter for Compassion will be unveiled formally in Washington, D.C., on Thursday, November 12, 2009.