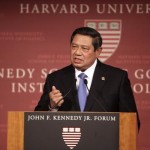 (October 15, 2009) – Several months ago, President Barack Obama made a historic speech in Cairo seeking to redefine relations between America and the Muslim world. I would like to respond to that speech.

Sixteen years ago, Samuel Huntington published an essay proposing that after the Cold War, civilisations, religions and cultures would become the defining feature of international relations and would constitute the primary cause of conflicts between and within nations.

To me, the term “clash of civilisations” itself is counterproductive. I don’t believe that civilisations are inherently incompatible and prone to conflict when they interact. But Huntington’s warning of post-Cold War fault lines and potential turbulence is not a trivial reminder. Civilisational issues are rife in modern politics. Indeed, Huntington’s warning also has relevance to Indonesia.

But we overcame these challenges. We adapted. And instead of failing, we thrived.

I believe we can fundamentally change and evolve the way civilisations, religions and cultures interact. This is not utopia; it is a pragmatic vision. I have seen it work. The question is: Can we make it work globally?

Let me outline nine imperatives to achieve harmony among civilisations:

The first imperative is to make the 21st century the century of soft power. In the 20th century we saw hard power in the form of warfare and a long Cold War that risked nuclear holocaust. One estimate suggests that some 180 million people died in the wars of the last century.

But there exists a large “soft power deficit” that the world’s civilisations must fill. In the 13th century, the Islamic civilisation was the most sophisticated in the world because it had an enormous thirst for knowledge. And this body of scientific knowledge from the Muslim world was later utilised by the Western Renaissance. Civilisations have built on each other’s knowledge and have become enriched by it.

The second imperative is to intensify global dialogue and outreach. We have seen many good initiatives. In 2001, the United Nations began the Dialogue Among Civilizations. Spain and Turkey later launched the Alliance of Civilizations. Recently, Saudi Arabia convened the Interfaith Conference at the UN. We must deepen the quality of these dialogues so that they produce specific actions and go beyond discussions among like-minded moderates.

The third imperative is the need to find a solution to political conflicts that drive a wedge between the Western and Muslim worlds. Today, some two out of three Muslim countries are in conflict or face a significant threat of conflict. In contrast, only one out of four non-Muslim countries face similar challenges. But despite these very complex conflict situations, Muslims must be able to differentiate between a conflict involving Muslims, and a “war against Islam”.

The fourth imperative is to strengthen voices of moderation in our communities. We must empower the moderates. They must speak up and defend their mainstream values in the face of opposition from extremists.

The sixth imperative is to make globalisation work for all. There can be no genuine harmony among civilisations as long as the majority of the world’s 1.3 billion Muslims feel marginalised and insecure.

The seventh imperative is to reform global governance. While the G-20 is more representative of today’s global dynamics, the UN Security Council still reflects the power balance of 1945 rather than 2009. The council needs to be restructured to keep up with today’s geopolitical realities.

Imperative number eight is education. Politicians often overlook educational opportunities in both our homes and our classrooms. But the answers are there; these are the real battlegrounds for the hearts and minds of future generations. It is in these places that we must turn ignorance into compassion, and intolerance into respect.

Finally, the ninth imperative is a global conscience. This is what I saw in Aceh after the 2004 tragedy when a giant tsunami killed 200,000 people in a half-hour. The whole nation was in grief.

But in this tragedy, we also found humanity. The whole world wept with us and offered helping hands. International volunteers from all over the world worked hand-in-hand to help the Acehnese. I realised that there exists a global conscience.

President Obama spoke in Cairo of a “new beginning” between America and the Muslim world. Today, I say that we can reinvent a new world not of conquest, but of connectivity. It will be a world defined not by a clash of civilisations, but by the confluence of civilisations. It will be a world marked by plenty, not by poverty. And it will be a vast empire of global minds breaking down centuries of collision and hostility.

* Susilo Bambang Yudhoyono is the president of Indonesia. This article, distributed by the Common Ground News Service (CGNews), is adapted from his speech, “Toward Harmony Among Civilizations”, delivered at the Kennedy School of Government at Harvard University on 29 September.