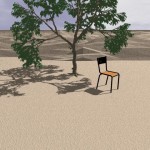 (December 15, 2009) – Someday we are bound to come back to the beginning. Even the most distant pathways always lead us inwards, completely inwards, into intimacy, solitude between ourselves and our self – in the place where there is no longer anyone but God, and our self.

Paulo Coelho, in his novel The Alchemist, has brought in one of the most traditional and deep teachings of Sufism (Islamic mysticism). Go, travel the world, watch, look for the truth and the secret of life – every road will lead you to this sense of initiation: the light, the secret, are hidden in the place from which you set out.

You are on your way not towards the end of the road, but towards its beginning; to go is to return; to find is to rediscover.

The apparent paradox of spiritual experience is the lesson that the constant effort, the jihād, that we make in order to purify, control and liberate our heart is, in the end, a reconciliation with the deepest level of our being (al-fitra) – there where the spark that God originally breathed into our heart gleams, there where our conscience weds our being and gives in to peace (salām).

The peace of recognition, the peace of submission (salām al-islām), is, deep down, a liberation.

God is “The One who created death and life to test you and to find out which of you would behave best.”

Death, life, experiences, ordeals, pain, solitude, as well as joy and happiness, are so many lessons along the road to reconciliation. Wounds, separations, tears, as well as smiles, “say” something: if you live in unawareness, they touch you; with God, they guide and lead you.

Where to? Where to then? Towards Him, towards you, close to Him in you.

Such is the most beautiful and the most difficult lesson of Islam: you find God only by rediscovering your own nature and the essence of your nature is the only thing that can free you from its appearance… “I” must set out to discover another “I”: such is the meaning of life.

Ordeals do not drive you to your limits, but to your origin, where “the need for Him” has its root. Ordeals will lead you back, whether you like it or not, to what you are, to the essence from which He has formed you. Exile will take you home.

A man once exclaimed to the mystic Rabia al-Adawiyya, “I have discovered a thousand proofs of the existence of God!” She closed the conversation by saying that she had only one proof and that was enough for her. “Which?” he asked. “If you are alone in the desert and you fall down a well, to whom will you turn?” “To God,” he said. “That proof is enough for me!”

A strange reply, seemingly simple, even simplistic, that a rationalist or atheist would without hesitation take as confirmation of what he had always believed: “God is the refuge of the destitute, the hope of the hopeless, a consolation, a reassuring invention!”

On the surface, but only on the surface… suffering and the unknown seem to press the mind to look for a refuge, a consolation. This is the logic our reason proposes when it looks on the human being on the outside of its nature.

The Islamic tradition says exactly the opposite: the ordeals of life, sadness, encountering the death of those we love, for example, take the human being back to its most natural state, to its most essential longing. Consciousness of limitation brings it back to the need for the Transcendent, to the need for meaning. To call on God is not to console oneself – it is to rediscover the condition God originally wanted for us – the spark of humility, the awareness of fragility.

Before your eyes is a child … life, dependence, fragility and innocence.

To be with God is to know how to keep this state: a humble acceptance of your fragility, a comprehension of your dependence – going back to the beginning. In fact, the temptation of pride consists in thinking that man can cut himself off from his nature and attain total intellectual autonomy to the point where he can take on his own suffering, deliberately and alone.