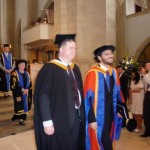 (August 10, 2009) – Sami Yusuf was awarded an Honorary Doctorate from Roehampton University in South-West London in July in recognition of his contribution to music.

At age 28, Yusuf becomes the University’s youngest recipient of this esteemed award.

The University awarded six honorary doctorates as well as degrees to over 2,000 students at its Graduation Ceremonies on Thursday 23 and Friday 24 July at Guildford Cathedral.

Selected for their extraordinary contribution to fields including human rights, dance and music – three areas of academic strength at Roehampton – the honorary graduates are:

Below is a transcript of Sami Yusuf’s acceptance speech:

“I am absolutely honoured to accept the award of Doctor of Letters…May I first express my sincere thanks to the Senate and Council, and Chancellor, John Simpson, for recognising me and my work and bestowing on me an honour that I will continue to treasure for the rest of my life.

Secondly I would like to thank all of you for sharing your day with me.

You have worked so hard, and made immense sacrifices to get to this moment, to achieve qualifications which will reward you for the rest of your life.

You all deserve to feel immensely proud of your achievement, it is your first step into the wider world.

You may be feeling daunted by this, but we have one thing in common.

We all face challenges in our lives, and we will all strive to overcome them.

Before I go on, I have to admit that I am not a very good pop star.

I don’t drink, don’t do drugs, and you won’t find me hauling Paris Hilton out of a nightclub at 4 am.

I am also shy, and I hate talking about myself, so please bear with me, I would much rather prefer to sing you a few of my songs – but I have not got any biographical ones.

So a speech it is…

I am not a man to give unwanted advice, but I can tell from my own heart that nothing has given me more pleasure than to be creative, to challenge orthodox thinking and to be the best I can be – from my personal and business relationships, to my work.

Some of you will obviously be wondering who I am! It is very hard for me to explain, but simply put, I am a proud British Muslim, from London, who has only ever made music I have wanted to make – I kind of call it “Art with a Purpose”

Basically I write and perform music which infuse the spirit of the Muslim character into a new sound both Western and Eastern in flavour and appeal.

I have sold albums to fans in countries as diverse as Saudi Arabia, Malaysia and Iran.

Which is nice, but that is more of a footnote to the journey.

I created records that were unthinkable by certain Islamic scholars, creating a new market among Muslims of all ages who were not permitted to listen to any popular music without incurring the wrath of family, friends and certain religious authorities.

So – when I first started composing and song-writing, there was simply no market for my music. I was writing about my love of God – not exactly something which would get me the attention of Sony or any of the global labels. Let alone Simon Cowell!

Sitting there at the piano or violin, I never considered whether it was brave or stupid……to create music no-one had ever created before… in a genre that didn’t exist…to a market which had never bought a pop record before.

It was just real to me; it was truthful and came from my heart.

Looking back now, I can tell you it is a relief. I certainly must have done something very right.

My own faith, my own identity led me to create this music, which spoke of my love of God and respect for fellow human beings.

All of this came about of me following my dream, being truthful with myself, not faltering or diverting when others have suggested a path I felt in my heart was wrong.

Happiness and success come when you make sure you hold your ideals and dreams as sacred, and then I assure you

Anything and everything is possible to achieve in life.

Thank you to all for sharing your day with me – it has been a real honour.”