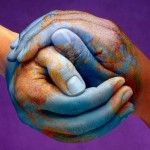 (November 12, 2009) – Karen Armstrong, winner of the 2008 TED prize, along with religious leaders from around the world, gathered today at the National Press Club to unveil the Charter for Compassion (www.charterforcompassion.org).

The Charter is a single document, endorsed by HH the Dalai Lama and Archbishop Desmond Tutu among others.

It was crafted by people from all walks of life, nationalities, beliefs and backgrounds with the intent to unify, inspire and bring compassion back into the heart of society.

Compassion is the principled determination to put ourselves in the shoes of the other, and is often referred to as the Golden Rule – a tenet that is central to all major religions.

At the unveiling, Ms. Armstrong, and religious leaders, called upon the world to make a commitment to living a life of compassion.

Over 60 Charter for Compassion Plaques, designed by Yves Behar and his team at fuseproject, will be hung in significant religious and secular locations around the world, in cities such as New York, Cairo, London, Ramallah, Melbourne, and Buenos Aires.

The design focuses on the power and meaning of the Charter’s words rather than purely the form. Consisting of sustainable maple, simple construction and laser-engraving, the plaques have a unique and iconic design reflective of the key messaging of Karen Armstrong. The text can be viewed at www.charterforcompassion.org.

As Ms. Armstrong explains, “Compassion is not the feeling of good will or pity. Instead it is the principled determination to put ourselves into the place of the other [that] lies at the heart of all truly religious and ethical systems.”

The final text of The Charter, unveiled today, calls upon all men and women
to restore compassion to the center of morality and religion.

Events to commemorate the launch of the Charter are taking place across the globe from Australia and South Africa to Argentina and Thailand with more than 100 partner organizations today and in the following week.

They include everything from art exhibits and film screenings to small lectures and large conferences.

Religious leaders will be giving services on compassion and the Charter in houses of worship this following weekend, November 13-15.