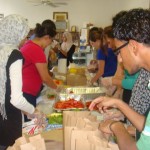 (September 23, 2009) – This year, 11 September was proclaimed the National Day of Service and Remembrance, symbolically concluding a nationwide summer of service movement, United We Serve.

This programme was launched by US President Barack Obama to encourage Americans to volunteer in their communities, and Muslim Americans stepped up to the challenge.

Since 11 September fell during Ramadan this year, it was a perfect opportunity for Muslim Americans to reclaim the day as one of commitment to one another and to our country.

Muslim Americans Answer the Call is a nationwide grassroots response to mobilise every single Muslim American in a united effort for community service.

And since the campaign continued through Ramadan, many of us felt there was no better way to show our faith than in action.

Beginning 22 June, the group committed to completing 1,000 community service projects, and we surpassed 3,000.

Projects ranged from partnering with the Salvation Army, an organisation dedicated to relieving poverty, to preparing thousands of meals for the homeless in our nation’s capital, to working with publishers to provide textbooks for under-funded schools on Native American reservations.

Last week I attended Fast2Feed, an interfaith iftar dinner marking the end of the daily fast, at the Sixth and I Historic Synagogue in Washington, DC.

Coming from multiple faith communities, the attendees brought food for the needy and combined service with an opportunity to learn about other faith traditions.

It was the first time I had attended an iftar at a synagogue and I wasn’t quite sure what to expect.

And then I heard the call to prayer–beautifully recited by a young Muslim man standing on the bima, the raised platform where the Torah is read.

He called out in Arabic, “God is great”, with two golden menorahs on either side of him, while standing in front of a Star of David etched in stained glass.

My children prayed on the synagogue bima that evening.

As I watched my seven-year-old son Zayd, hands folded and facing East, and my 13-year-old daughter Saanya, head covered and eyes sparkling, I was overwhelmed with the poignancy of it all.

I took a picture and let the moment wash over me.

And then it dawned on me: what I was finding so remarkable, so uniquely beautiful, seemed absolutely ordinary to them.

For Saanya and Zayd, praying at the synagogue felt as comfortable as praying in our mosque or in our living room.

For them, it was joyously unremarkable.

The past several years, 11 September has been used to evoke fear, animosity and division.

This was our opportunity to demonstrate who we are and what we believe in through our actions, to reveal what is central to our faith through acts of service and compassion, and to reclaim our place in the American mosaic.

The United We Serve campaign ended on 11 September.

But it should really mark the beginning of a more collaborative, sustained effort to make service a part of our daily lives.

On 11 September, I talked to Zayd’s class about Ramadan and Eid al Fitr, the Muslim celebration marking the end of Ramadan.

Saanya and I made cards after school, continuing our craft-based service project to raise money for children’s education and then served dinner at a homeless women’s shelter in our community.

Our president calls us all to action.

Our faith calls on us to act.

Nothing should stop us in this race to good works.